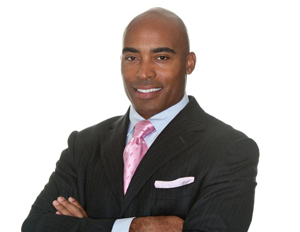 Tiki Barber, former NFL running back, is now the face of a new web-based startup.

“What I would love to happen is for the consumer to realize that we’re just people,â€ Barber said, his hands tapping the table to emphasize his point. “We have great jobs that people care about, write about and obsess and gamble on … but we’re just real people. We’re not a caricature. We are just a guy — or a girl. And with Thuzio we want to take away the mystique.â€

The most effective part of Barber’s ground game in his pitch for Thuzio includes genuine empathy for athletes who, with their playing days behind them, often struggle for meaning and purpose.

After a short-lived comeback effort in 2011, Thuzio seems an unlikely venture for Barber, who for all of his threats to retire, always seemed to straddle the line between fan favorite and New York tabloid whipping boy. His destination there seems unlikely; throughout his ten year career, he seemed, to his credit, largely indifferent about his own celebrity. In 2010, when the Giants inducted Barber into the Giants Ring of Honor, he was showered with boos. Other Giants heroes were given a hero’s welcome.

As a retired athlete, Barber understands the fear associated with being someone who used to be someone. Barber hopes athletes that participate are empowered to take ownership over their own careersÂ  whether they become involved with Thuzio or not.

“It’s really a fear of rejection and [the threat] of having a negative outcome thrown on you,â€ says Barber, who added that people on the street say good and negative things in his direction. “Rejection and negativity is hard to deal with. But I think what I’ve learned going through the ups and downs even when I was playing was that ultimately I’m in control of where I go. Someone can have so many bad opinions about me, but if they don’t know me or know where I’m trying to go then it doesn’t matter. You kind of just have to let it [go] and be secure in who you are and where you’re going in your life. The challenge is a lot of guys don’t know where they’re going. They see themselves as football players and don’t see the end … wherever it may be.â€

The end for Barber’s football career came after the 2006 season, just before the Giants won the Super Bowl in February. Barber has said he is not financial straits, but many were confused by an effort to return in 2011. An SEC filing indicates that Barber makes a $200,000 salary, but Thuzio refused to confirm or deny.

Asked why he was drawn to Thuzio, Barber has to think.

“I found myself in a void professionally, I had just stopped working for NBC and I was looking for what was next. I love broadcasting but it’s a tough industry to grab a hold in. I saw a lot of my former peers doing nothing. Kind of like I was but obviously in worse off situations.â€

Barber feels fortunate to be comfortable with his celebrity, now that it’s literally paying off.

“A lot of guys are insecure with their popularity … they feel exposed when they’re out,â€ he says. “You see them always on their phones, introverted. The problem [with being a retired athlete] is that you can’t monetize your craft anymore … but there is still some value. You’re going to languish and wallow for a little bit and feel bad, but eventually you’ve got to get up again.â€

Before long, Barber was off to another meeting, but not before he talked a little football. He marvels at his twin brother Ronde’s ability this late in his career. He’s borderline obsessed with Robert Griffin III, who he believes will be the next wave of quarterback in the future. He still watches the Giants. Frustrating to watch, he says, “because they’re so damn good.”

As we said goodbye, a member of the staff needed his attention for a briefing. But first, Tiki Barber walked to a side room. He was getting his own water.