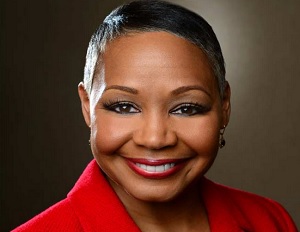 On Wednesday, NBA Commissioner Adam Silver announced the appointment of former Coca-Cola executive Lisa Borders to president of the WNBA.

Coming to the sports arena withÂ  more than 25 years of experience in operations, marketing, government relations, and public service, Borders most recently served as chair of the Coca-Cola Foundation and vice president, Global Community Affairs at The Coca-Cola Co. Prior to her work with Coca-Cola, she was president of the City Council and vice mayor of Atlanta where she managed the legislative branch of government while maintaining a relationship with the mayor’s office during Mayor Shirley Franklin’s administration. During this time, Borders was also instrumental in helping to bring the WNBA franchise, the Dream, to Atlanta in 2008. In 2009, she also ran for mayor of the city.

[RELATED: Be Inspired and Register Today! 7 Black Women of Power in Sports You May Not Know But Should]

“As a proven executive with a passion for the WNBA and the game of basketball, Lisa is the right leader at a pivotal time in the league’s history,” said Silver in a statement on WNBA.com. “She will be responsible for spearheading our efforts to strengthen the WNBA and accelerate its growth.”

In addition to working at Coca-Cola and with the city government in Atlanta, Borders also served as senior vice president of marketing and external affairs with Cousins Properties Inc., a real estate investment trust (REIT) based in Atlanta. While there, she also served as president of the company’s foundation. Prior to that, she spent more than 15 years working as a senior healthcare administrator and operations executive.

“The WNBA has reached a significant milestone, and I feel privileged to be joining the league at such an exciting time,” said Borders in a statement.Â  “I have always been a staunch supporter of this league and its tremendous athletes. I am impressed by their talent and inspired by their passion. The athleticism of the game and the sportsmanship exhibited between teams offers clear evidence of our ability to grow women’s basketball.”

She will step into her position March 21, following the resignation of Laurel Richie.