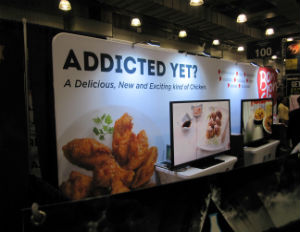 If its impressive showing at the recently concluded International Franchise Expo in NYC is anything to go by, maybe African American prospective franchisees should take a look into BonChon Chicken.

After attending the expo, Blackenterprise.com is putting the spotlight on franchise opportunities showcased at the expo that may have potential.

At the expo hosted at the Jacob Javits Convention Center, the lines of people waiting to sample and re-sample BonChon’s fried chicken could be testament of the Korean franchise’s prowess inside its kitchens.

With years of hands-on experience with Korean cuisine, founder Jinduk Seh, decided to focus on perfecting a recipe for fried chicken, and share one of his country’s favorite comfort foods with the world. The result was Bonchon, Korean word for “my hometown.â€

The chicken is rolled out in two major flavors, a robust and savory soy-garlic chicken and a hot and spicy chicken.

RELATED: Franchise Spotlight: Is “Fastsignsâ€ Banner Year A Sign Of The Times?

Borrowing a page from KFC, BonChon says its has a secret recipe its refuses to share with anyone. According to the staff, Bonchon Chicken is cooked-to-order, made with the highest quality ingredients and hand-brushed, piece-by-piece, with savory, secret sauces.

Blackenterprise.com spoke with Sophie Lee, franchise coordinator at BonChon Chicken. She says, “We opened our first U.S store in 2006, and became franchisors in 2011. So we are pretty new on the scene.”

She says BonChon is always on the lookout for prospective franchisees. The company has two corporate stores, one in Massachusetts and other one at its 38th street store and 26 franchisees in the U.S. It also has more than 100 locations in South East Asia. The plan is to introduce its brand of chicken to U.S. fried chicken and fast food lovers.

According to Lee, the 38th street location is usually packed with African American customers.

Word-of-mouth alone has helped the brand spread across America in states like Massachusetts, Virginia, California, and Texas. BonChon is on the hunt for passionate franchisees to join the “global expansion and share their success.”

The company’s training process for franchisees include site-selection, construction and training, on-site training, and then a grand opening.

The franchise fee for a single-unit according to its website is $35,000. You can also check out the other rates on its website.