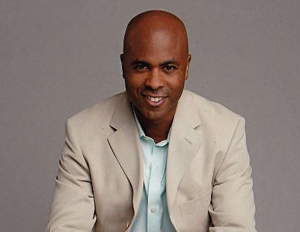 Philadelphia has undoubtedly produced some of the greatest professionals in the world, and the talent pool doesn’t seem to be drying up any time soon. From Billie Holiday to The Roots to Kobe Bryant, the talent pool from Philly is continuing to grow and make an impact around the world.

Meet Fred Thomas Jr. (@derfsamoht), a South Philadelphian, who has flown high but under the radar. The seven-time NAACP Theatre Award nominee and winner of “Best Director,” “Best Playwright” and “Best Producer” for his play “12’x9′,” is making major moves in the entertainment industry. The Lincoln University alumnus, who went on to receive his master’s degree in film and media arts, is taking advantage of every opportunity. From his role as one of the original friends who starred in the Budweiser “Whassup Guys! Campaign” to his role on TV One’s R&B Divas LA, the actor, director and producer is catching his stride at the right time.

I caught up with Thomas to discuss his career in the entertainment industry, his role on reality TV, and what young men of color need to know in order to make it in the business.

Some people may see entertainers and think it’s all about flash and talent. How important is having a mentor, and finding internship opportunities in the entertainment business?

Fred Thomas Jr.: It is very important. You can learn everything on theory in class, but you need to learn the practical. It is important to work on as many quality productions as you can, such as Shakespearean and August Wilson-types of plays, which are done at just about every theater. Look to work on music videos and television shows as well.

Through your internships you gain knowledge around the language, protocol on how things are done and the paperwork. Most important, you understand the social aspect. You will be developing relationships and working with many different types of people on different projects, shows and sets. Being able to know and understand social business end etiquette is critical. I was able to benefit tremendously from my internships with MTV, and learning as an apprentice under Walter Dallas at Philadelphia Drama Hill.

When was the moment you realized that you had to pursue this as a career and make a living working in entertainment?

From the time I was about 8 years old I was acting, writing directing and producing. I would do little children’s plays and write short sketches. From reading MAD magazine and watching Saturday Night Live, I would put together sketches based around my classmates and perform them during recess at school. The ‘Aha moment’ is a funny one: It was in ’88 when Spike Lee had just released School Daze. The part of the movie we all love was the dance scene to the track “Da Butt.â€ So I rallied all of my freshman and sophomore classmates together to gather in our dorm auditorium to remake our own “Da Buttâ€ video. We shot the Lincoln University “Da Buttâ€ video, and after I experienced that, I knew it’s what I should be doing.

What motivates you to continue to pursue your career and career goals every day?

I love to create. I have a God-given talent to share experiences through stories. Entertaining and having the ability to make people feel good and happy is rewarding for me. It is also life changing, and being that there is a lack of African-American stories being told there is a responsibility on my end to make sure we are heard.

The latest franchise of R&B Divas just premiered with the Atlanta cast. How did the opportunity to work on R&B Divas LA and how did it impact your career?

Some producers of the show saw my work and my name was thrown around when they were looking for someone to produce their play, “Divalogue.” I had just finished up my play “12’x9,'” so there was a lot of buzz around that. I got the call and I took the opportunity to bring my talents to the show and to the production.

The women have had a positive impact on thousands of people through their individual stories. Being able to mold these stories into an artistic piece where the ladies are performing as both singers and actors fostered great relationships. I have been called to do more guest speaking, and teach classes focused on black aesthetics and our image in the entertainment business. There were all positive things that came from my experiences on the show, especially being able to help the Divas help someone else through the play.

What advice can you give to young men of color who seek succees in the entertainment industry?

Listen when God is talking to you. I did not always stay focused on one thing. Stay focused and grounded in that one thing that you know you truly have the ability to do. Don’t second-guess yourself, and your abilities regardless of what other people have to say.

Stay educated on the technology and abreast on what is going on because it is constantly moving and moving fast. There is a lot of work going on behind the scenes with 3D animation and special effects, but we are missing from these areas of the industry.

Create, create, create. You have to practice. Read, write, and watch movies. Recreate things that you have seen in movies as your blueprint and map out your story. Don’t be afraid to use your friends and family to create a story or play. Everybody wants to be an actor, so let them act in your story.These are ways to put the pieces together, then have someone knowledgeable in writing and producing look over your work.