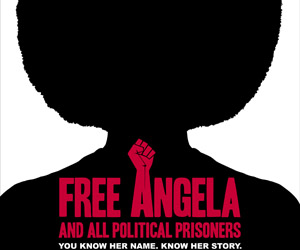 “She’s not a two-dimensional image,â€ Lynch says. “There is a third dimension to her.â€

Lynch feels that the personal side of Davis that is shown in Free Angela is just as important as Davis’ politics.

“She’s not this individual divorced from a community, and she’s not a woman alone. [She] has feelings, and she makes choices, and these are the things that you see in the film,â€ Lynch says. “You see her making these choices as an individual, and their repercussions, in the context of a particular time. And out of that comes this great movement and all these other things.â€

The celebrity backing of the film came as a pleasant surprise to Lynch, who admits to sometimes having difficulty raising money for the project.

“I had no faith in celebrities to join,â€ Lynch says. “[Davis] was a former communist and she is a public intellectual that asks questions that make us uncomfortable. Political prisoners? And now she talks about prison abolition? Not prison reform, [but] prison abolition? These ideas and questions that she raises aren’t necessarily so easy to be sponsored by corporations.â€

But a friend showed Jada Pinkett Smith the film, which eventually led to Overbrook Entertainment (ran by Pinkett Smith, Will Smith, and James Lassiter) and Roc Nation becoming executive producers of Free Angela & All Political Prisoners.

However, Lynch stresses, if the work wasn’t good, none of this would have happened– including the film’s distribution with AMC Theatres through Codeblack Films and Lionsgate. She advises aspiring filmmakers to make sure they actually like their work before they put their names on it.

“Don’t rush it if it’s not done,â€ Lynch says. “I’ve seen too many people make that mistake. And then you don’t get another chance, because what’s your calling card? Angela would never had said yes if it weren’t for my previous film on Shirley Chisholm running for president in 1972. Nothing I could say to her spoke more than when she saw that film.â€

Lynch has a few more projects in the works, and would also like to write a book on the Angela Davis story, delving deeper into things that couldn’t be included in the film.

For now, Lynch’s main focus is getting Free Angela & All Political Prisoners “out to the world,â€ a world that sometimes still remembers Davis as being guilty.

“Why do we remember as her guilty? Because there was way more discussion of it than it was of her innocence,â€ Lynch says. She admits that she, too, had her doubts when she first began the project. “You know, I started this wondering, really wondering, whether the verdict was just,â€ Lynch says. “And now I know. Although Angela would say, ‘A justice would have been no trial at all.’â€