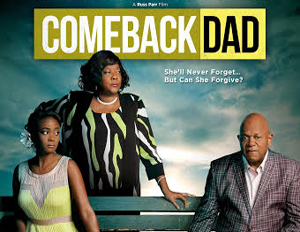 The cast is amazing. Talk about how were you able to get “Comeback Dad” optioned by UPtv and land veterans of the industry?

I’d applied for the UPtv Faith & Family Competition and became a finalist, but didn’t win. “Comeback Dad” is my first big produced project. The network liked my script and decided to option it. I met with executives, and the film went into production three months later.

I was sitting in a Starbucks and we’d finally gotten to a version of the script that the network. I got a call from the producer, and he just casually said, “Oh yea, you know, we cast the lead. It’s Charles Dutton.” It just blew me away. I was elated… just shocked.

From there Tatyana Ali and Loretta Devine agreed to do the film, and really… it’s just the story that was appealing, that resonated with them … humanizing fathers who aren’t there.

You never think your first film will have such big actors in it … It’s just amazing.

What advice do you have for young filmmakers who hope to see the success you have?

Join a film community of some sort. Find groups, professional opportunities where you’ll be among film peers, or collectives in your town. You want to be around others who will help you sharpen your skills and support you.

Get a film consultant or mentor. The consultant will cost but it’s an investment in finding out how good (or bad) your work is. If you can’t pay a consultant, find someone in the industry who is great at what they do who you can learn from.

Register your works with the Writer’s Guild of America. I always register the idea along with according to the type of work it is. This will help protect your work, it’s really simple and affordable. Also, try to own all aspects of your brand. For example, I went out and bought or claimed all the things —from social media to Website domain—that are “Kimmy Got Soul.”

Be consistent and current with your body of work. When you have something, don’t just sit it because it’s not ‘perfect.’ Work on it, revise it, send it out, get notes, polish and move on. Have at least three projects that represent who you are and what your work represents. People really just genuinely want good ideas, good stories and good characters—they’ll work with you to develop it further.

Comeback Dad airs on UPtv on July 12th, 2014 at 8pm EST. Find out more on Walker at KimmyGotSoul.com.