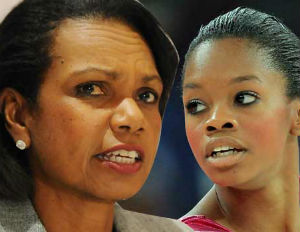 Gabby Douglas’ outstanding performance in the London Olympics this summer has caught the attention of Condoleezza Rice, according to TMZ.

While many have focused on Gabby’s nickname “the flying squirrel” and the controversy around her hair, the former secretary of state believes she is a hero.

“I’m proud of their team gold and thrilled for Douglas and her momentous accomplishment as the first African-American to win the individual all-around gymnastics title,” said Rice.