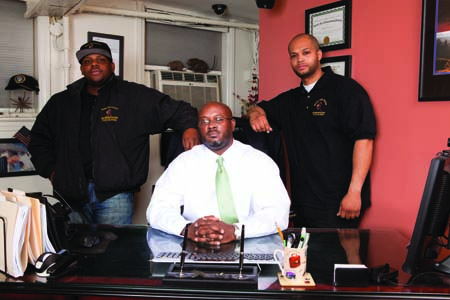 Todd Pemberton believes everyone deserves a second chance at finding his or her way. And so, since 2008, the 44-year-old owner of Bugs Are Gone (www.bugsaregone.com), a Brooklyn-based pest-control company, has been touring state and federal penitentiaries, teaching inmates about entrepreneurship and giving them a shot at employment upon their release. He believes that life doesn’t end with incarceration. “There are things for you to do when you come out,â€ he says.

As of last December, there were 81,213 African American inmates, making up 37.5% of the prison population, according to the Federal Bureau of Prisons. For many of them, employment opportunities after their release are limited. Forty percent of inmates don’t have a high school diploma or its equivalent, and according to a three-state recidivism study, less than half of former inmates are awarded jobs upon their release, reports the National Reentry Resource Center.

Despite such grim statistics, Pemberton encourages inmates to plan for a successful future–one that puts them in charge of their own destiny. “A lot of companies aren’t going to hire you because you’re a felon,â€ Pemberton explains, “so entrepreneurship is a way for you to go.â€ He has helped inmates plot strategies for launching a myriad of business endeavors, from retail outfits to clothing lines to pest control. Pemberton opened Bugs Are Gone in 2002 and soon after studied entrepreneurship through a 16-week-program sponsored by New York’s Workshop in Business Opportunities (WIBO), a nonprofit dedicated to helping people become entrepreneurs. The program also inspired him to visit penitentiaries.

Realizing that entrepreneurship is not for everyone, Pemberton also sources jobs for parolees. “As long as your disposition is OK, you can get pest-control jobs,â€ he says. “It’s one of the best careers out there for an inmate to come out and be successful.â€Â  His firm has hired roughly 12 former inmates in the last three years and has been pleased with their level of integrity and strong work ethic. Most just want the opportunity to turn their lives around and support their families. “You have people that are very, very hungry,â€ Pemberton says. “They’re not going to be the ones that are like, ‘Oh, I’m not feeling good today, I’m not coming in.’ They’re going to be the guys where when your doors open at 8 a.m., they’re already there at 7:45 a.m.â€

In 2010, WIBO awarded Pemberton the Walter Geier Inspiration Award, named after the organization’s founder, who believed in teaching entrepreneurship as a way of elevating others. “Everything that I’m doing Walter Geier did,â€ Pemberton says. “He was committed to entrepreneurship, volunteering, community development, and minority advancement and education. Getting that award just validated everything that I was doing and let me know that I was on the right path.â€

4 Apps to Boost Your Score

FacebookTwitterYoutube
← The Game Plan ← 4 Apps to Boost Your Score
×
'