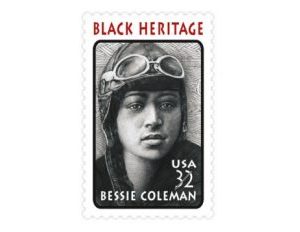 From her biography at bessiecoleman.org:

Coleman earned her piloting license in France. She was born in Texas, one of 13 children. She finished high school, attended college, and dropped out after a semester due to costs. Her next move was beauty school, where she became a sought-after manicurist in a salon owned by the then-trainer of the Chicago White Sox.

An avid reader, she followed the pivotal Wright Brother’s flight at Kitty Hawk in 1903, in fascination. She began toying with the idea of flying herself only to be told by her brother, “You nigger women ain’t never goin’ to fly, Not like those women I saw in France.â€ In the early 1900s, many African Americans sought opportunity in France–as the country was more open-minded and welcoming toward blacks.

She was resolute, however. She was turned down by every American flying school to which she applied. She finally reached out to the editor and publisher of the Chicago Weekly Defender, Robert S. Abbott about her dream of flying.

Abbott did some research and recommended she apply to an aviator school in France. Coleman was accepted to France’s most famous flight school–Ecole d’Aviation des Freres Cadron et Le Crotoy.

After seven months’ training, she received her international pilot’s license. From her biography, “to receive this license, she had to demonstrate high skill sets comprised of life-saving maneuvers including turning off the engine before touching down.â€

Coleman eventually headed back to America where she eventually became a featured attraction in air shows, performing stunts and parachuting out of planes. She became world famous.

She died April 30, 1926, after falling to her death when a plane she was testing, flipped over.

Bessie Coleman left a remarkable legacy and demonstrated persistence and courage that inspired many other African Americans in the aviation field.

Read the full details about Coleman’s life at bessiecoleman.org.