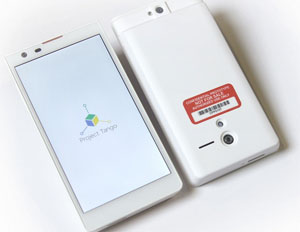 Google's ATAP team has partnered with universities and institutions to create a phone that can detect its surroundings in real time.

For the past year, Google’s Advanced Technology and Products (ATAP) team has been working on Project Tango, a smartphone that can map your surroundings as you move through them.

Google’s ATAP group is led by Regina Dugan, formerly the director of the Defense Advanced Research Projects Agency (DARPA), and comes from its acquisition of Motorola, whose handset division it recently sold to Lenovo for $2.9 billion.

The smartphone gathers information with its motion tracking camera and depth sensor that processes “over a quarter million 3D measurements every second,” according to the project description. As you’re walking through your home or office, it builds a 3D map of the surrounding area.

Google’s interest in mapping the inside of your home isn’t new; Google already has an indoor Google Maps program for businesses like IKEA and the Mall of America, and Street View inside airports and train stations around the world.

Mapping your living room isn’t the only thing Google is hoping to do with the technology. It’s giving away the Tango devices to developers in the hopes that they’ll come up with interesting uses for the technology, including augmented reality games and assisting the disabled.

The driving force behind the project is Technical Program Lead Johnny Lee, no stranger to the world of augmented reality thanks to his head tracking virtual reality hack with a Wii remote that garnered worldwide attention. Before joining Google in 2011, he was part of the Kinect team, Microsoft’s motion tracking camera for use with its Xbox 360 and Xbox One consoles.

You can check out Google’s Project Tango video below and, if you’re a developer interested in getting your hands on one, sign up for potential dev kit access on the project’s site. There are only 200 kits available, and according to Google, they’ll be gone by March 14.