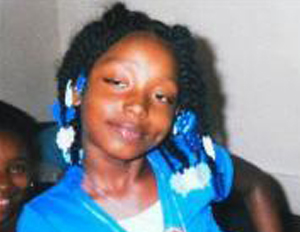 Mertilla Jones on Monday testified in a Detroit court that she watched a police officer shoot her sleeping 7-year-old granddaughter in the head, the Associated Press reports.

Aiyana Stanley-Jones (pictured) had just gone to sleep on the living room couch of her grandmother’s first floor apartment, when a group of armed, masked police officers swarmed in. Officer Joseph Weekley, on trial for involuntary manslaughter, has admitted mistakenly shooting the girl in 2010.

“I seen the light leave out of her eyes and the blood started gushing out her mouth and she was dead,” said the 50-year-old Jones, who sobbed through her testimony.

Weekley said his gun fired when Mertilla Jones bumped into him or grabbed it. But prosecutors are arguing that he was negligent and failed to control his weapon.

Police were looking for a murder suspect who lived on the second floor apartment of the duplex where Jones and her granddaughter were. Members of the tactical team said they were unaware there were children in Jones’ apartment.