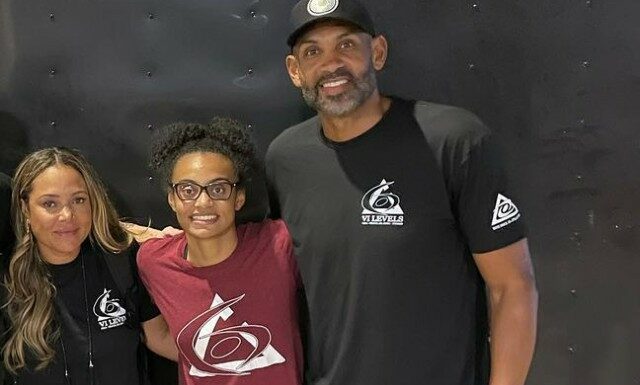 Grant Hill has passed the sports torch to his 19-year-old daughter, Myla, who completely obliterated her opponent during her debut MMA fight.

Myla won her first mixed martial arts match at the Rival Fight League: Halloween Havoc event in Lakeland, Florida, on Oct. 29, The Shadow League reports. Video shows Myla taking control of the fight early on and dominating her opponent throughout the first round.

The daughter of NBA alum Hill and singer Tamia made her family proud. Grant took to Twitter a few days after the fight to offer more praise to his teenage daughter.

“4 days later, and I’m still in awe of my daughter Myla’s performance in her first amateur MMA fight,” he wrote. “She was focused, composed (which her mother and I were not before & during the fight), aggressive & clearly not afraid of the moment inside the octagon. #TeamMyla #ProudDad”

Myla fought Jenna Loza and had the upper hand after placing Loza in a chokehold in the first round. She is already showing signs of having a promising MMA career.

Grant Hill was a celebrated NBA player during his time in the league. But he, unfortunately, retired in 2013 without having won any NBA championships. He enjoyed 19 seasons in the league and decided to retire during the Eastern Conference Finals, ESPN reports.

“I’m glad to say I’m done,” Hill said at the time. “I’m officially retired, moving on from playing. I had a great run. I’m announcing it now. … I’ve been hinting at it the last few years. You get to a point where you just don’t want to do it anymore but I’ve enjoyed it. I’ve loved it.”

Myla’s mom Tamia is also a well-known and respected singer and songwriter who is the voice behind classic songs like “Stranger In My House,” “So Into You,” and “Officially Missing You.”