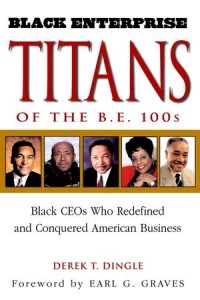 What makes chief executives ofÂ  the nation’s largest black-owned businesses great? When I wrote my book, Titans of the B.E. 100s, I found a largely self-made lot that conquered obstacles–lack of capital, diminished access, and outright racism–to seize opportunities, break barriers, forge institutions, and, in many cases, change the course of commerce and society.

There are those, however, who are a cut above, elevated to rare air. There’s the late John H. Johnson of be 100s mainstay Johnson Publishing Co. Inc., who presented a diverse, multidimensional black America to the world through his publications and introduced the value of the African American consumer market to corporate advertisers. Another trailblazer, the late Reginald F. Lewis, demonstrated that African American entrepreneurs can deftly structure complex financial deals after he orchestrated the $985 million leveraged buyout that created TLC Beatrice International Holdings Inc., the first black corporation to gross more than $1 billion. Then there’s baseball legend Henry “Hankâ€ Aaron, who not only beat Babe Ruth’s home run record but hit grand slams in the automotive and food industries. Billionaire dealmaker Bob Johnson, founder of BET, took the company public on the New York Stock Exchange–an African American first in 1991–then private again and sold it for approximately $3 billion; he would go on to buy and sell other groundbreaking companies in professional sports, real estate, automotive, and finance. And there’s Oprah Winfrey, who acquired the rights to her talk show almost 25 years ago and leveraged her brand into a multimedia empire.