For Greg Anthony at the 2014 Final Four, Another Unforeseen Milestone 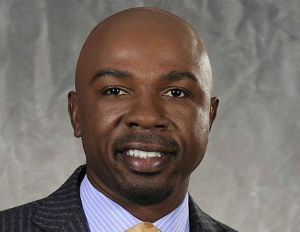 But Mr. Anthony said that viewers shouldn’t expect him to go into the weekend seeking to do his best Clark Kellogg impression.

“His experiences are invaluable, but ultimately when you do anything in life, you’ve got to do it the way you believe is the right way. I get a lot of great advice, but it’s just like playing the game: you put players in the position where they feel comfortable. I’ve got to be me. I’m the only me that I know.”

Mr. Anthony’s ascendance to one of the top jobs in American sports broadcasting is the latest example of hybrid talent growing through the ranks at Turner Sports. His own experience as a studio analyst on NBA TV and CBS Sports, as well as a gig covering the Brooklyn Nets during the 2012-2013 season, made him one of most visible analysts in the game.

David Levy, president of Turner Broadcasting, said that Turner’s relationship with NBA TV has allowed Turner Sports to showcase the talents of Grant Hill, Chris Webber, Kenny Smith, Steve Smith and Mr. Anthony. “They all used it as a chance to hone their skills and get better,â€ Mr. Berson said. “I wouldn’t call it a training ground because it’s really not. We have superstars who are on it, and we have new people. But it’s an opportunity for us to expose the talent we have and get new ideas out there.â€ Mr. Anthony appears on several NBA TV studio shows, an asset that allowed Mr. Hill, a newcomer to broadcasting, to participate in his first N.C.A.A. Tournament as an analyst.

“There would have been no way I would have been able to bring someone like Grant Hill into the Turner organization without having NBA TV and NBA.com as part of our portfolio so that he could have that chance to use his talent,â€ Mr. Levy said.

As for Mr. Anthony, his latest assignment begins Friday in St. Louis when No. 7 New Mexico takes on No. 10 Stanford.

“I look back 13 years ago when I started, it makes me think about being a young kid and how I never thought I’d play pro basketball for 12 years,â€ he said, reflecting how fortunate he’s been over the course of his career. “I dreamed about stuff like that, but I had another plan for my life in terms of what I wanted to accomplish that was more realistic.

“In life you never know what hand you’re going to be dealt, said Mr. Anthony, a Las Vegas native. “But it’s important to be prepared when the opportunities present themselves.â€