Hereâ€™s Why This Black Scientist is Marching in Washington 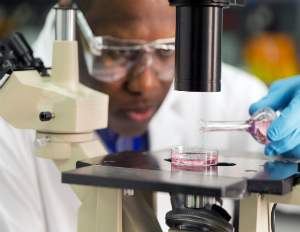 There’s a grassroots effort brewing and this time it’s not from political activists or even Black Lives Matter protesters. This is a call-to-action from scientists.

On Earth Day, April 22, scientists, those in the scientific community, and people who value science, will participate in the March for Science in Washington D.C. The march will begin at 10 A.M. at the National Mall and continue throughout the streets of D.C.

There is a March for Science website thatÂ states the mission. The goal is, “a celebration of science. It’s not about scientists or politicians; it is about the very real role that science plays in each of our lives and the need to respect and encourage research that gives us insight into the world.â€

The organizers say that the need to rally is from politicians discrediting science. Indeed, the march came about after several anti-science actions were made by the Trump administration.

First, the Trump administration ordered the nation’s federal agencies–many of them science organizations–not to share news, post to social media, to their websites, or speak to any of the press. Censored agencies include NASA, NIH (National Institute of Health), the E.P.A. (Environmental Protection Agency), the CDC, and others.

Then, right after taking office, the Trump administration removed any mention of climate change from the official White House website. Trump also appointed a bevy of climate change deniers and anti-environmentalists to key cabinet positions.

Virgil Cooper is an African American nuclear and diagnostic medical physicist. The Johns Hopkins Ph.D. is set to attend the DC March for Science. He feels his presence is important even though the admittedly shy scientist says rallying is “outside my comfort zone.â€ He’s marching in memory of a teacher who inspired him.

“I had always been good at math,â€ says Cooper. “It interested me and then I hit fifth grade.â€ He explains that his science teacher, Mr. Hanish, was very nurturing but tough and that “he cut me no slack.â€ Cooper says the inspiration from his teacher led him to a career first as an x-ray technician with a two-year degree, to a scholarship at theÂ University of Cincinnati where he studied health physics/nuclear engineeringÂ and then a full ride to Johns Hopkins.

Cooper’s research and work involves ensuring imaging safety with the technology and procedures used to provide x-rays, cat scans, mammograms, and other medical imaging. He has to ensure image quality and safe levels of radiation are emitted during these medical tests.

As a scientist, he is ardent about the importance of this march as well as the attendance of other people of color in STEM.

“I’m not marching as a scientist I am marching as that fifth grader. I want other fifth graders to get their inspiration. They may get it from a group of people showing up and saying, ‘This is not OK once you engage in anti-intellectualism.’ You will see black faces, brown faces, yellow faces, females, transgendered, gay, and straight,â€ at the rally, says Cooper.