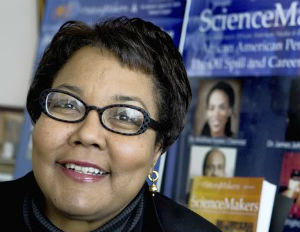 Richardson, an audacious entrepreneur who at one pointÂ created her ownÂ home shopping network, admitsÂ the project had been one of her mostÂ gruelingÂ undertakings. AlthoughÂ HistoryMakers was praisedÂ for producing one of the most organized collections,Â she saysÂ working with the world’s largest libraryÂ and independent tech firms to manage metadata and voluminous analog and digital files “took seven days a week overÂ four years.” Thus far,Â the conversion of 2,000 hours of material has been completed, and the next stage is expected to take another four years.

Richardson, who holds a double major in theatre arts and American studies from Brandeis University and a J.D. from Harvard Law School, is also a tireless fundraiser.Â Thus far, HistoryMakersÂ has raised $13 million of its $30 million goal to complete the archives project. In addition to individual donations,Â it has gained corporate sponsorship and grants over the years. For example, Richardson received a $2.3 million grant from the National Science Foundation for its ScienceMakers series. And the late Herbert P. Wilkins, Sr., founder of Syncom Ventures (No. 9 on the BE PRIVATE EQUITY FIRMS ListÂ with $410 million in capital under management) – one of the initial financiersÂ for African American media giants such as BET and Radio One – gave HistoryMakers a $1 million gift to expand its oral histories of its MediaMakers group.

Most know HistoryMakers’ series of An Evening With… specials – interviews with such luminaries as Harry Belafonte, Colin Powell, Diahann Carroll, Quincy Jones and Berry Gordy – that have aired on PBS. These taping sessions have grown intoÂ exciting, redÂ carpet events thatÂ have proven to be effectiveÂ fundraisers.

I have had the privilege of attending two such affairs: One in 2006 honoring BLACK ENTERPRISE Publisher Earl G. Graves, Sr. who was interviewed by former NAACP ChairmanÂ Julian Bond – the first sessionÂ highlighting a business powerhouse – and last year’sÂ eventÂ featuring Xerox Chairman and CEO Ursula BurnsÂ with Gwen Ifill of PBS’ Washington Week serving as interviewer. EachÂ eventÂ garnered more than $1 million in corporate donations.

On April 12, I plan to attendÂ theÂ nextÂ HistoryMakers event, An Evening With Vernon Jordan, in New York City.Â TheÂ program celebrating the life and achievements of the civil rights leader-cum-power broker is expected to generate as much as $1.5 millionÂ in corporate donations.

I gained a preview of sorts whenÂ IÂ sat in onÂ the taping ofÂ Vickee Jordan Adams, vice president of external communications for Wells Fargo Home Mortgage, offering a moving personal account of her dad. She recalled how herÂ father faced a howling mob as a young attorney escorting Charlayne Hunter-Gault into the University of Georgia in 1961 when the future journalist and another black student desegregated the institution;Â as a college student in 1980 she received the harrowing news of the then-National Urban League presidentÂ beingÂ shot in an assassination attempt; and seeing his personal and professional transformation in his ascension to becoming a top adviser for President Bill Clinton, among others. In “growing up Jordan,” she learnedÂ toÂ persistÂ in any endeavor despite whateverÂ obstacle may come your way.

For Richardson, that’s the type ofÂ inspirational messageÂ that’s at the heart of telling our stories.