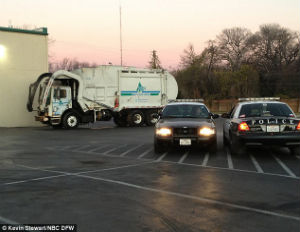 A homeless man in Fort Worth, Texas, was seeking a warm place to sleep inside a garbage bin on chilly Wednesday morning when a compactor truck came to pick up the garbage.

The truck began to compact the contents of the bin and the man started to scream, alerting the driver that he was inside.

By the time the driver was able to stop the machine and get 41 year old Chad Adams out, he was in full cardiac arrest, EMS personnel told CBS. He was transported to the hospital where he later died from his injuries.