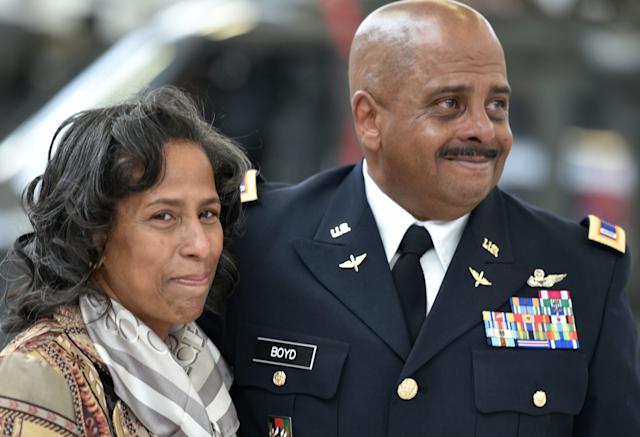 On May 31, Stephen Boyd will proudly retire as the longest-serving Black aviator in the Massachusetts Army National Guard.

The decorated pilot, who first enlisted in 1984, continues to make historical milestones. Last Saturday, Boyd became the first African American to achieve the rank of chief warrant officer 5, Cape Cod Times reported. After devoting his life to the Army National Guard, this recent promotion speaks to his many accomplishments as a pilot, aviation safety liaison, and mentor to other soldiers.

“For whoever comes along after me, I hope that my contribution makes their journey a little bit easier,” said Boyd.

Boyd says he is most proud of his contributions as an aviation and ground safety officer for Headquarters U.S. Army Africa based in Vicenza, Italy. He has worked in this position for the past five years. Among his responsibilities, Boyd is dedicated to improving the safety culture of African countries. He wrote a safety program that has been used and expanded on by the militaries of Uganda and Kenya.

“I was able to have a lasting impact, where I could stem that tide of accidents and deaths, not just in our military service, but in other countries across Africa,” said Boyd.

As a Black aviator, Boyd hopes that his accomplishments will continue to blaze the path for other people of color who want to serve in the National Guard. His triumphs are a product of his upbringing. Boyd grew up in a military family, having his parents’ determination, discipline, and faith instilled in him. His father, Arthur Boyd, was born in 1920s Alabama and served in the military during World War II when the military was still segregated.

“With my father growing up in Jim Crow South and serving a segregated Army, and a generation later, I stand here as an aviator and a senior warrant, that really is the American dream,” said Boyd in a video he filmed for the Armed Forces Network, as per the Times.

Boyd attended flight school at Fort Rucker in Alabama, where he saw very few who looked like him. Although Fort Rucker has become more diverse, Boyd truly believes that the military can improve recruiting, where officers of color would go into communities of color to talk about service.

“It’s an institution, and I’m one man. The institution is where the work needs to be done,” he said.

In his next chapter, Boyd has accepted a civilian position in the Department of the Army with the Safety Division of the Southern European Task Force-Africa, in Vicenza, Italy. He and his wife are set to leave for Italy later this spring.

Boyd credits his new promotion rank to his wife, who has been with him since enlisting.