House Passed Bill to Make D.C. the 51st State, It's About Time 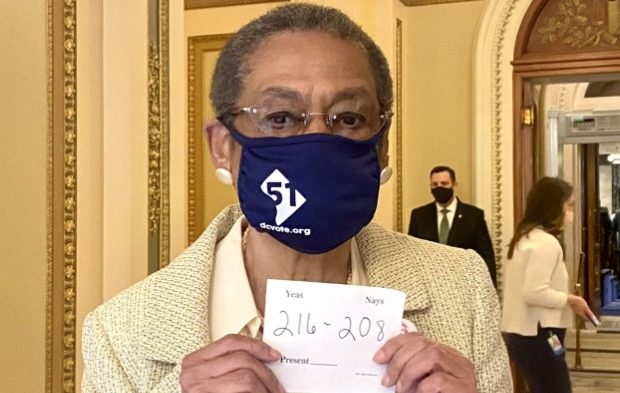 The House of Representatives approved a bill to make the District of Columbia the 51st state. H.R. 51 passed by a vote of 216-208. Congresswoman Eleanor Holmes Norton (D-DC) was among supporters of H.R. 51.

“Today’s victory was historic, both for D.C. residents and for the cause of D.C. statehood,” Holmes Norton said in a press release. “For only the second time in history, the House passed the D.C. statehood bill. With Democrats in control of the Senate and White House, and with 54% of Americans supporting the bill, we have never been in a better position to achieve D.C. statehood.”

In a CBS News interview, Norton said that people who live in the capital have been treated differently and unequally from everyone else living in the country. The Hill reported that the bill was introduced by Holmes Norton. The District would be renamed as Washington, Douglass Commonwealth, in honor of abolitionist Frederick Douglass. Additionally, a federal government-controlled area would be created.

“H.R.51 notes that some parts of D.C. would remain federal property if it becomes a state, including national monuments and federal buildings. Those will remain in the federal District of Columbia. Outside of that, residential and commercial areas will be listed under the Douglass Commonwealth,” The Hill also said.

Common Cause is a nonpartisan grassroots organization dedicated to building a stronger democracy and holding power accountable. It urged U.S. House Members to support D.C. Statehood Bill (H.R. 51). A letter signed by Common Cause’s president, Karen Hobert Flynn, mentioned that over 700,000 D.C. residents pay more in total federal income tax than residents of 22 other states, but they have no say how those tax dollar are spent.

“We must strive for a democracy in which everyone can participate and have full representation,” Hobert Flynn also said.