How Your Business Can Profit From the New Industrial Revolution 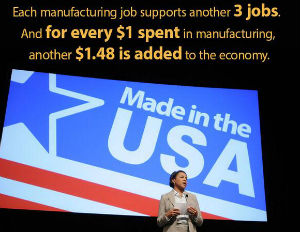 So what does all this mean for you? In a word: Opportunity.

During the press conference call following the kick-off, I asked Bill Simon how the Made inÂ USA initiative will include expansion and development of minority-owned manufacturing operations. His response: “As part of our agenda, we seek to have a diverse supplier program, and we are quite ready to make long-term investments in those
manufacturers…Walmart will also seek to get our partners to focus on this area
as a source of investment.â€

Made in USA connects with Walmart’s recent supplier diversity/development efforts. The mammoth retailer spent roughly $11.6 billion with women- and minority-owned firms in 2012. Boosting the procurement spend among manufacturers should mean an even greater outlay for contractors of color. In fact, expect to see this U.S. manufacturing thrust addressed at future BLACK ENTERPRISE/Walmart 20/20 Vision Forums, our series of supplier diversity/development events designed to help African American businesses land and manage large contracts with major corporations as well as expand business networks.

There’s great potential for accelerated growth of established African American manufacturers and emerging firms in the space. Take a look at the composition of our 2013 BE 100s. Manufacturing companies collectively represent the third
largest revenue-generating category, behind auto dealerships and information technology
firms. In 2012, they grossed $4.7 billion — or 18% — of total BE 100s revenues of $26 billion.

Automotive parts suppliers like Detroit-based Bridgewater Interiors LLC (No. 3 on the BE INDUSTRIAL/SERVICE list) and Dublin, Ohio-based Modular Assembly
Innovations LLC (No. 4 on the BE INDUSTRIAL/SERVICE list) have grown into industry leaders with $1 billion operations. As a result, these entities and others like them contract with smaller minority firms and, in some cases, place them on track to ascend to BE 100s status. So the infusion of more high-performance manufacturers among the universe of BE 100s companies can put a significant dent in African American
joblessness — the current black unemployment rate hovers around 13% — and
strengthen the African American middle class.

For maximum impact, a good number of African American firms will have to strike strategic partnerships with other minority businesses and majority companies — note that global powerhouse Johnson Controls owns a 49% stake in Bridgewater. And with the significance of advanced technology, African American manufacturers should align with Black Digerati and other African American entrepreneurs in the tech arena. Such alliances will help drive industrial innovation — and that’s beneficial to US manufacturing and
American industry as a whole.

It is vital for African entrepreneurs to take advantage of this retooled business environment. By doing so, they will have the best shot at developingÂ companies built to last.