How to Develop a Successful App for Apple's App Store 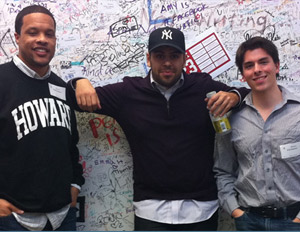 Patrick Jackson, Emil Anticeic and Thomas McLeod–founders of Imaginary Feet–have accomplished an enviable feat for app developers. They have several mobile applications in the Apple App Store, including two ‘Top 10’ photography apps called SpyPic and SpyVid, which collectively have more than 180,000 downloads. Their most profitable app, Pagelime, caters to people who design websites. It allows the designers’ clients to make changes without the designer being involved. They’ve raked in more than $100,000 from subscriptions to the Pagelime service alone.

“Getting noticed in the App store is like a business in and of itself,â€ says Jackson, a graduate of Howard University, who still works full time at the U.S. Department of Defense. “Give people the features that they want and they won’t mind paying for it.â€

Of the 350,000 apps in the app store, how do you make sure that yours will get noticed? Here are Jackson’s six tips to creating an app that is not only downloaded often but makes you money, too.

Start by solving a simple problem.

Most of the successful products we use today started from a very simple premise — they solved a problem. They initially did one thing, and did it well. Google started with making Internet search better. Hotmail started with making the first web accessible email client. Facebook connected you better with your friends. These products now have many features, but they all started by initially solving one problem.

The faster you get your app in the user’s hands, the faster you’ll get feedback on how they want to use it. Don’t try to throw every feature into your first version. Odds are, you’ll never finish. Don’t confuse the user by giving them too many initial features. Let them request them–they’ll appreciate you listening and incorporating their feedback in future versions.

“At Imaginary Feet, we like to complete our version 1.0 in 4 weeks or less,” says Jackson. “We even created one app in 17 hours. Although this rapid development methodology may not apply for every app idea, we think it covers most of them. The first few weeks is when your are still on your ‘idea high’ and you will be motivated to finish your app. Take advantage! During the ‘idea high’ phase, your excitement fuels you to finish your idea and you’ll be amazed at what you can accomplish (most times at the expense of sleep!).”

Refine your app overtime with feedback from your customers.

Very seldom will you deliver exactly what the user wants with version 1.0. This is normal. Within the app, encourage users to give you feedback. You’ll be able to refine your app, make it better, and even find more ways to monetize all by requesting feedback.

Make your app free for a few days.

“We’ve tried nearly everything to promote our apps. The only tactics that seemed to work also happened to be the least expensive. We learned that making an app free for a few days creates free buzz that translates into increased future sales. There are computer programs that wait until a paid app becomes free then send out alerts through blogs or twitter. Before you know it, folks all over the world are spreading the word about your app for free!”

Sell add-ons for your app.

Used effectively, in-app purchases are a gold mine for an app developer. When users give you feedback they may be indirectly telling you what features they wouldn’t mind buying. This feedback may start like “wouldn’t it be cool if…â€ or “I wish I could do…â€ These are generally features the customer doesn’t expect you to implement but would love if you did. Introduce them as premium features and charge a buck or two. In-app purchases are also a great way to utilize the “freemiumâ€ business model where you give your app away for free but charge for extra features.

You never know what may be a hit application until you put it out. One thing is for certain… you’ll never make any money off apps you never build!

Inventors Insider: How to Create an App for That