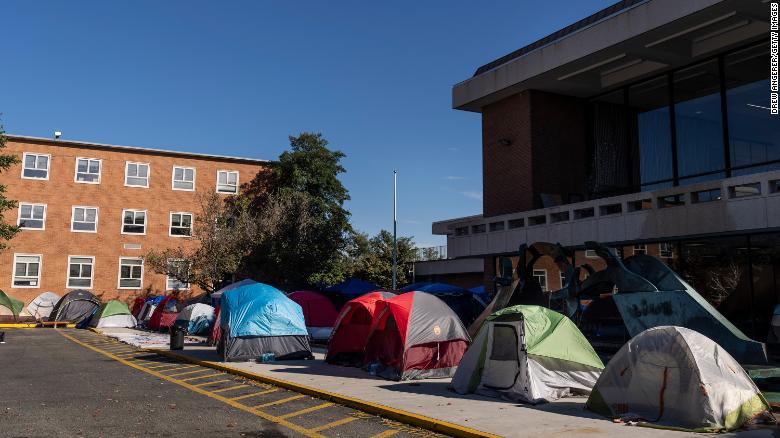 It’s been one month since Howard University students began protesting the living conditions in campus housing buildings, and students are still tents, waiting for the university to address their concerns.

The school issued a statement to CNN redoubling their commitment to transparency and indicating that there has been some dialogue with the students to address their concerns and demands.

“We are hopeful the measure we have taken, including listening and communicating with students, supplementing resources within our residence halls through our Hyper Care initiative, and inviting faculty, alumni and student leadership to participate in board committee meetings with voting power will set us on a path toward peaceful resolution.”

However, HU junior Channing Hill, president of the NAACP chapter on campus, says it does not reflect what she and other students have been experiencing.

At the forefront of the list of demands made by students is a townhall meeting with the president to simply lay out a plan to address the ongoing housing issues. But Hill says the university seems reluctant to make that happen.

“I can’t answer for a university president who refuses to speak to his students,” she adds. “I can’t give that answer for university administration who we technically pay. But what I can tell you is that the students simply are looking for conversation. Our demands are not demanding, they’ve never been. To ask a town hall of the university that we go to, when there are students who are being made ill, including me, from their dormitories.”

More than 4,500 students, parents and other supporters have also signed a petition requesting the university sever ties with Corvias, Inc., the company which manages the residential buildings. Hill noted that this is not a new issue, explaining that it was something that has been address each year she’s been at the school, and documented as far back as 2001.

The ongoing protest and concerns at Howard is bringing to light the severe underfunding HBCUs deal with in comparison to their predominantly white counterparts. According to U.S. Government Accountability Office HBCUs have an average endowment of $15,000 per student, compared to $410,000 at non-HBCUs.

There is an allocation of $2 billion earmarked for educational programs and infrastructure at HBCUs in President Biden’s proposed Build Back Better Act, which is expected to be passed by the House of Representatives by Thanksgiving.