If You Can Write, You Can Read 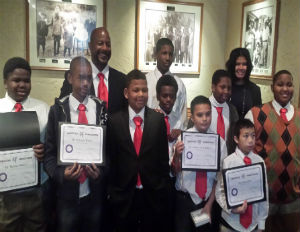 The program met once a week during the school year for an hour; a few sessions were held after school. At each session the boys could write in their book. Mauldin also took advantage of technology: Since Logan was in school himself and unable to attend all the sessions, his mother would take questions from the boys and, at the next session, show a video of Logan answering each of their questions.

At the end of the sessions, If You Can Write You Can Read partners with a restaurant which provides space and dinner or a discount. “That’s where we held our celebration. Everyone received a certificate of completion, but the contest winner also got his work copyrighted,â€ says Mauldin.

A signature of If You Can Write You Can Read is red ties, so every boy who participated and turned in a manuscript received a red tie after they were handed their certificates.

Asked why ties are distributed, Logan says, “Ties are a great way to show professionalism.â€ An early introduction to professional dress may be especially important for these boys, because they all attend Title 1 schools, which are low income. Logan showed the boys how to tie their ties and then tied them for them. He himself learned by looking it up online.

So far, If You Can Write You Can Read has held three Write-A-Book contests; the most recent was held early this year.

The results are in

And what about results? Mauldin didn’t work directly with the teachers, but the Communities in Schools coordinators told her that the boys who had completed Write-A-Book became a little fraternity. “The teachers started a list of boys who wanted to be in the next Write-A-Book contest,â€ she says. One coordinator wanted her students to participate after noticing how one particular boy, who had won, had changed after participating.

As a social enterprise, If You Can Write You Can Read has a responsibility to give back, Mauldin says. “When we sell the books as well as charge a minimal cost for the program, we take a percentage and purchase the certificates and ties, and contribute the funds that will go toward a dinner and whatever else that comes with it. Fortunately, we have had sponsors for the dinner. [They have also had sponsors for other aspects of the program; for example, Men’s Warehouse once sponsored 10 ties.] Running the program is not costly,â€ Mauldin says, “because Communities in Schools has a budget. There’s no overhead and no real expense.â€

Located in Charlotte, North Carolina, If You Can Write You Can Read is hoping to expand regionally and then perhaps nationally.

“Not all the kids want to be authors,â€ Mauldin says. “Some are more interested in playing football. But then I ask them, ‘Who’s going to read your contract? What if you get injured? Then you can write contracts for others.’ We’re teaching self-sufficiency as well as writing and reading.â€

For more information about If You Can Write You Can Read, go to its website.