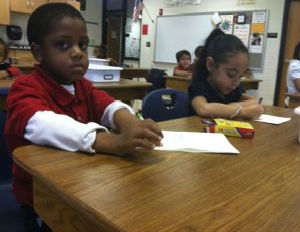 Written by Scott Elliott, founding bureau chief of Chalkbeat Indiana and an award-winning journalist who has covered education for 18 years:

After Key Learning Community opened on Indianapolis’ east side in 1987, the school quickly became famous, appearing everywhere from CBS and NBC national news broadcasts to major publications like Life Magazine and the New York Times.

Drawing on the psychological theory called Multiple Intelligences, developed by the Harvard professor Howard Gardner, the school aimed to help kids discover what interested them, how they learned best, and what sorts of projects they could undertake to expand their understanding of core subjects.Â In keeping with the Multiple Intelligences idea, which argues that humans have different kinds of capabilities, rather than one general intelligence, students were encouraged to study academic subjects while also developing their visual, musical and interpersonal skills.

Over time, Key made a regular appearances in the footnotes of research articles, cited as one of the best real-world manifestations of Multiple Intelligences theory applied to schooling.

Yet by 2012, Key was in serious trouble. Its once-solid test scores had plummeted, then stayed low. Teachers worried about rumors that the school might even be closed.

Searching for explanations, some pointed to the school’s changing demographics. Since 1987, the school’s students had become considerably more poor. The rise of the school accountability movement, with its emphasis on proving success through standardized test scores, also seemed to pose a possible threat to a school that valued creativity as much as basic skills.

But since 2012, an ambitious young principal, Sheila Seedhouse, has helped the school achieve a remarkable shift in academic performance–without letting go ofÂ Key’s “Multiple Intelligencesâ€ spirit or changing the kinds of students the school serves.

Seedhouse’s approach seems to be working. The school, which serves 410 students in all grades, from kindergarten through 12th, earned an F from the state for its high school students’ performance in 2012-13, but its middle schoolers earned a C, and the elementary school earned a B Â after consecutive F’s going back to 2005.

The grade reflected a jump in the portion of Key third through eighth graders scoring proficient on state tests to 57 percent in 2012-13 from 36 percent in 2011-12.

Gardner, the father of the Multiple Intelligences theory, was not trying to redesign schools when he published Frames of Mind, his seminal book, in 1983. Gardner, a psychologist, attempted categorize human behaviors that he felt qualified as “intelligence.â€

He originally identified seven: visual-spatial, bodily-kinesthetic, musical-rhythmic, interpersonal, intrapersonal, linguistic, and logical-mathematical. Every person, he theorized, possessed a unique mix of strengths and weaknesses in each category. Gardner also pushed back on standardized testing, arguing that it mostly measured just two types of intelligence.

A group of IPS teachers who read Frames of Mind made a pilgrimage to meet Gardner at a speaking engagement in Pennsylvania in 1984, proposing the idea of building a school around the intelligences. Gardner told them he’d never thought of using the theory that way.

The Key school opened with 150 students in grades K to 6 in 1987, with Gardner’s blessing, to national media attention as a worldwide first. Among the features of the program was time when students could explore interests in any of the intelligences areas, according to a 2007 Phi Delta Kappan magazine story. In one class, students trained for a half marathon, keeping journals and tracking statistics on their running. In another, a student created her own puppet show to conquer her fear of public speaking.

In 1999, Geoff Davis had just quit teaching out of frustration after 15 years. He had no plans to return until a friend persuaded him to apply at Key, promising it was different.

Davis is an artist and musician who loves to use his art to liven up his classroom lessons. That was increasingly impossible by the time he quit his job at a suburban Carmel elementary school, he said.

“I love teaching but I had been completely burned out by the demand for high test scores and lack of any creative outlet,â€ he said.

But Key proved to be different.

“It was all about creativity,â€ he said. “I was encouraged to bring my art and music into the classroom. I could paint during prep period. I thought it was too good to be true.â€

Projects were central to the curriculum. Students made art, wrote songs, and planted gardens, all with the goal of learning about math, science, history, and literature while doing something they loved. Many of his students, he said, were the children of politicians, artists, and other high-profile community members. The kids came to school ready to learn, and their families bought into the school’s approach.

The result mirrored Indianapolis’s economic achievement gap: in the same period, Key exceeded the school district’s passing rate in its goals for test score growth. The school was a gem, one that IPS liked to show off.

In the years after he arrived at Key, David watched as the kids began to change. Their families were less wealthy and often unfamiliar with Key’s traditions.

The shift happened quickly. In 2003, 51 percent of the students were poor enough to qualify for free lunch, a 10-percentage point jump from five years earlier. Five years later, the percentage of students on free or reduced-price lunch jumped another 18 percentage points higher to 73 percent poor in 2008. Today nearly twice as many students at Key, 87 percent, are poor.

Parents were once energized and involved at Key, lining up for parent-teacher conferences. But with a different population, fewer and fewer were showing up, and the declining interest snowballed, Davis said.

“It caused flight,â€ he said. “Students who had been there were soon gone.â€

Rebecca Counts, who teaches third and fourth graders, came to Key in 2009 and watched the freedom students were given fail to have the desired effect.

“It worked really well for a long time when you have student investment and parents involved,â€ she said. “When the clientele shifted, changes weren’t made to what was being done to still be effective.â€

The students’ needs were different, Davis said, and Key wasn’t meeting them.

“We can blame it on a dozen things,â€ he said. “The point is the novelty wore off. We started getting kids who were being kicked out of other schools. It got very bad very fast.â€

The teachers remained dedicated to the school’s philosophy and its carefully crafted program of study– sometimes too dedicated, according to Davis.

“We were so tied to those precepts we were completely resistant to changing,â€ Davis said. “When we started to understand, we didn’t react fast enough.â€

“There was some elitism too,â€ Davis said. “We didn’t feel like we had to do things differently.â€

The district struggled for a solution. Before Seedhouse was hired, the school was restaffed twice, forcing teachers to reapply and installing new leadership.

Counts said by 2011 there was a real worry the school wouldn’t survive, prompting a openness to new ideas among some, but not all, teachers.

“The big goal was to make sure the school did not shut down,â€ she said. “We needed staff and students on board with the new changes.â€