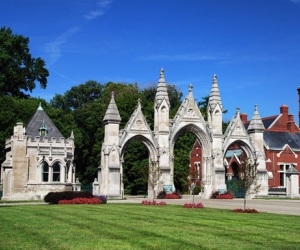 Indiana’s first African-American physician was honored today with a commemorative grave marker. The unmarked grave, believed to belong to Dr. Samuel A. Elbert, will be turned into a headstone at the Crown Hill Cemetery.

After they refused to grant him a degree despite him paying tuition and attending classes, Elbert challenged the Medical College of Indiana in 1871. He eventually won the case, making him the first licensed African-American physician in Indiana.

Senior archivist from the Indianapolis Historical Society, Wilma Moore, said, “Grave markers always suggest legacy and legacy is important to let folks know that you were here. They also suggest what you did when you were here and that you will not be forgotten. Certainly in Dr. Elbert’s case his legacy is great.â€

Read on The Grio