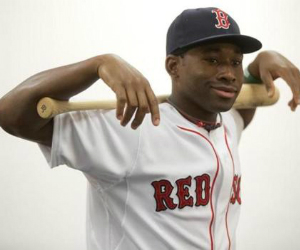 The Boston Red Sox have brought up rookie prospect Jackie Bradley, Jr., and he made an impressive debut on Opening Day against the rival New York Yankees. He had the poise of a veteran going up against one of baseball’s best pitchers in CC Sabathia.

You may not have heard of him, but keep your ears and eyes open as he may be the surprise story of this young season. He’s won 2 College World Series’ and doesn’t have any Triple A experience, yet, less than 2 years after graduating college, he is, indeed, in the big leagues.

Here are 10 facts about the player the Red Sox hope can carry the torch from David Ortiz,Â  Jackie Bradley, Jr.

1. He was drafted by the Red Sox with the 40th overall pick in the 2011 Major League Baseball Draft

2. He was named the 2010 College World Series’ Most Outstanding Player

3. He attended the University of South Carolina

4. He was named the Red Sox Minor League Defensive Player of the Year in 2012

5. He had been named to the 2008 Virginia AAA All-State team

7. His father is a bus driver in Richmond, Virginia

9. Both Bradley Sr., and Bradley Jr., were named after famed singer Jackie Wilson.

10. He made his professional debut on August 23, 2011 with the Class-A Short Season Lowell Spinners