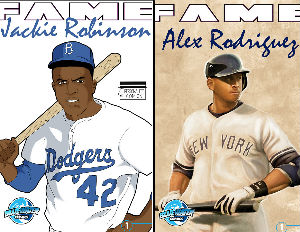 Set to retail exclusively with Comic Flea Market starting tomorrow (June 5), for the low price of $3.99, the comics give an illustrated look into these players’ lives both on and off the field. As Rodriguez was known for his baseball techniques and public ordeals, the picture pager-turner, written by CW Cooke with art by Amer Moghrabi, “take[s] a look at his earliest days on through his most recent escapades and gives the inside scoop on this possible legend of baseball.â€

“It’s great to see this classy illustrated biography of the Dodger legend introduced to a new generation of readers,â€ says Robert Schnakenberg, the writer behind the comic book.

Bluewater Productions is known for their illustrated biographies of athletic greats including David Beckham, Danica Patrick and Mikhail Prokhorov, owner of the Brooklyn Nets.