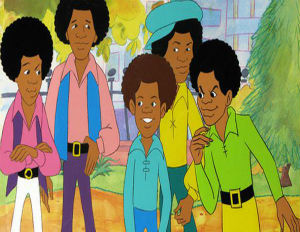 Jackson 5ive: The Complete Animated Series will be released by Dreamworks Classics to DVD and Blu Ray on January 15th.

The Saturday morning cartoon, which has developed a cult following, was produced by Rankin/Bass and Motown and aired on ABC from 1971 to 1972.

The cartoon characters in the 23 episode series were not voiced by Michael Jackson and his brothers, but featured their music.