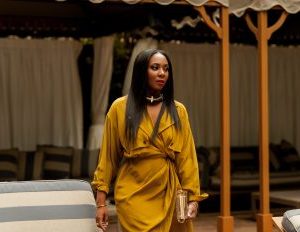 Jae Scott isÂ an image consultant and motivational speaker. She holds a master’s degree in fine art and her career has included stints at Victoria’s Secret, as a beauty and visual merchandiser, and as a luxury consultant for Bergdorf Goodman.

As Scott’s fashion career has evolved, her interest in connecting people’s inner beauty with their outward appearance led her to explore motivational speaking. With the help of her mentor, the VP of Bergdorf Goodman, Scott leaped head-on into the world of entrepreneurship.

Here, she shares her journey, offers strategies for those wanting to enter the world of high fashion, and shares the inspiring advice she would give to her 13-year-old self.

Black Enterprise:Â In your LIM speech, you said, “Dreams without goals are nothing.” How did you turn your dream of becoming a motivational speaker into actionable steps, which led to a dual-city tour and, more recently, your lending of insight toÂ Forbes.com?

While studying and working in my field, I realized that “image”Â contributes to a better life. Through my professional work experiences as a luxury stylist, it became apparent that outer beauty actually masks how we truly feel, if we are not grounded in the way we ultimately want to feel. Because of this knowledge, I was able to excel in connecting with my clients on a personal level, and from this, my platform emerged.

I wasn’t just a “personal shopper,â€ I was someone knowledgeable that they could talk to, [a] reliable [professional] that they could trust, and someone who saw them for who they were, while building them up [and improving] their image.

After experiencing and observing image and its correlation to a better life on a day-to-day basis, my clients and co-workers encouraged me to pursue motivational speaking. This concept of bridging the gap between physical beauty and inner beauty was unheard of during my tenure at Bergdorf Goodman, so I decided this is the gift that I wanted to share with the world.

Next, I researched and honed in on my target audience by finding individuals and groups that would benefit the most from my message.

Then, I networked, created relationships, and established allies in the industry, which put me forward for speaking opportunities.Â  I have also volunteered and shared my expertise on platforms–such asÂ Forbes.com–on social media outlets, [and via] the Passion to Purpose tour, and at schools, such as LIM and Morgan State University.

BE: Part of your journey has included time working as a personal shopper at Bergdorf Goodman, where you were mentored by one of their top executives. How did mentorship play a role in navigating your career to where you are now?

Scott: The most valuable lessons I have learned, which have helped to get me to where I am today are:

These three valuable tidbits came from my lifelong mentor, the VP of Bergdorf Goodman.

Upon taking the position, I was aware that the connections I was to make at Bergdorf Goodman would be crucial to my success. Wanting to become an industry expert, I sought out a mentor who, I felt, was humble yet stern, had a track record of success, and ultimately, who I could respect.

I believe that as a mentee seeks a mentor, a mentor finds a mentee. The relationship has to be mutually beneficial. I approached the one person who I felt encompassed all three, the vice president of Bergdorf Goodman, who constantly encouraged me to build my own personal brand and who also inspired my interest in motivational speaking.Â  It was with this relationship that I received two aspects of growth that I still carry until this day–personal and career development–personal being the less obvious of the two.

With his guidance, I learned to value my personal development just as much as my career development. He enabled me to train myself to become and to perform as the person that I wanted to be–as a motivational speaker plus a top stylist–not as the person that I was. These building blocks, which I mastered with his help, gave me the courage and tenacity to move forward into the next phases of my career.

BE:Â What would you say is the biggest misconception people might have about you?

Scott: I smile at this question, because, for some reason, people tend to think that I “have it made,” and that I don’t go through what “normalâ€ people go through. As always, there are two sides to every story, and mine is that I’m an ever-evolving woman from urban Washington, D.C. I refused to let systemic stereotypes define or limit me, and I moved to New York City with $30 and a big dream.

I workedÂ hard to get to where I am, and I’m still working hard every day. Perhaps, the only difference is that I’ve found my purpose, and I can now pursue my dream. It’s hard to pursue a dream without having a purpose first. But, as the saying goes, “At each level, there is a different beast.” So, now I’m working to turn all of the tools and all of the knowledge I’ve learned along the way into a well-oiled machine.

BE: Earlier this year, you launched a dual-city tour to kick off your motivational speaking career. What did you learn from the experience of putting the program together, and what would you do differently?

Scott: I launched the Passion to Purpose tour to fill a void that I found while working in the industry. I wasn’t surprised to learn that others felt the same void, as there aren’t arrays of open forums for diverse groups of young professionals in high fashion. I was surprised to learn that serious professionals value candid conversations, as the Passion to Purpose audience craved our dialogue regarding the good, bad, and mundane scenarios [that arise while] working in the industry.

To improve next year’s tour, I will have a team to help support the cause–including sponsors, additional speakers, coordinators, and more. I’ll be engaging in more advertising to reach a wider audience. We look forward to the challenge of 2017, with stops inÂ  Louisville, KY, Washington, D.C. again, andÂ  adding the highly requested New York City.

BE: What advice would you give to your 13-year-old self?

Scott:Â Don’t be afraid of fear, because it’s a natural human emotion and one that is inevitable for a person to experience. You have the power to push past that fear and go after your true heart’s desire. It is the one who gets stuck that loses, and it’s the one who acknowledges it and pushes through it, who becomes a champion.

BE: You’re an image consultant, author, and motivational speaker. What’s next?

Scott:Â I recently launched a visual experience called JTalks with BET correspondent and ESPN2 host, Jamila “Mediaâ€ Mustafa. JTalks allows its viewer to instantly become inspired through an immersive journey, where the audience gets an inside scoop of the duties of a dreamer.