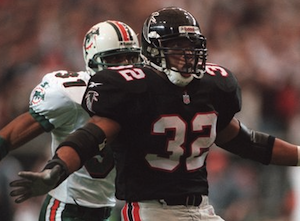 Former Atlanta Falcons star RB Jamal Anderson is set to bid his “Taj Jamal” adieu because his Atlanta mansion will soon be handed off to the highest bidder in a foreclosure auction.

Anderson defaulted on his loan and the unnamed bank that financed his purchase in 1999 sold the home for $1 million, some $225,000 less than what Anderson paid when he bought it.

Anderson rose to fame as a standout on the Atlanta Falcons where he led the team to its first and only Super Bowl appearance in 1999. He helped popularize the Dirty Bird, a popular end zone dance.

But Anderson suffered a knee injury that ended his career in 2001 and has since had a few run-ins with the law. In early 2009, police found Anderson doing cocaine and marijuana in a Buckhead-area bar. Then, in June 2012, the former pro-bowler was arrested on suspicion of drunk driving. He’s currently serving a 12-month probation term and had to pay a $700 fine.

TMZ has the deets on the Anderson home saga.