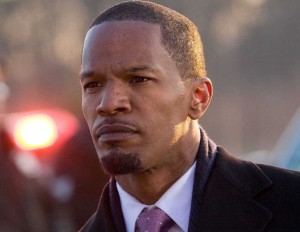 Jamie Foxx is set to play Little John in “Robin Hood: Origins,” a Lionsgate film that was put into production late last year, Deadline reports. His castmates include Taron Egerton, who plays the title role, and Eve Hewson, who is set to play Maid Marian.

Foxx’s character is described asÂ “more in the mold of the muscular turns he has put into films like Django Unchained than some wizened mentor.” The character is a war-weary veteran of The Crusades who starts out as distrusting of Robin Hood before warming up to him in what is being called a gritty take on the legendary story.

Previous depictions of the film have ranged from comedy to satire, so this one is set to be a very different, more action-packed and dark version of the age-old saga. It will still be set in Sherwood Forest and it’s being directed by Otto Bathurst of Peaky Blinders fame. The most recent Robin Hood film was in 2010 and starred Russell Crowe and Cate Blanchett, topping $320 million worldwide at the box office.

The film is being produced by Leonardo DiCaprio’s company, Appian Way Productions, as well as Safehouse’s Harold and Tory Tunnell and Thunder Road’s Basil Iwanyk.

Academy Award—winning Foxx hasn’t starred in a film since 2014’s Annie,Â deemed a flop, bringing in $62.2 million worldwide. He’s currently also set to act in a comedy crime heist film called Baby Driver, which is in pre-production, and Sleepless Night, a crime thriller currently in post-production.

Marlon Wayans To Produce Show Based on His Life