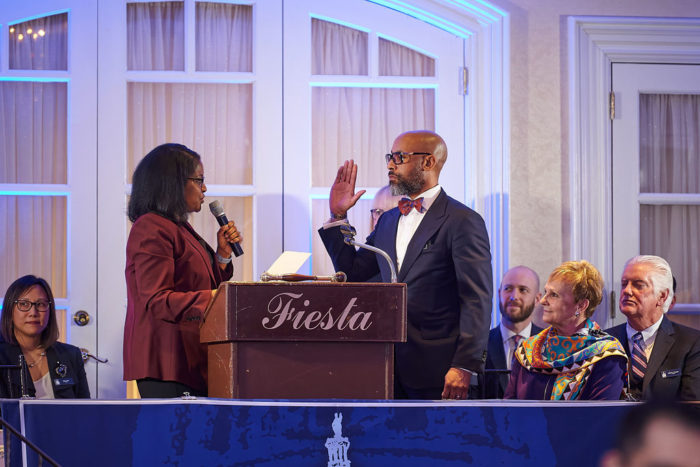 Jason E. Foy has made history as the first person of color to be sworn in as president of the Bergen County Bar Association since its establishment 124 years ago.

On April 6, Associate Justice Fabiana Pierre-Louis, the first Black woman to serve on the New Jersey Supreme Court, delivered the oath of office at the ceremony held at The Fiesta in Wood-Ridge, NJBIZ reported.

“I am humbled and proud to accept this honor and historic role as the first Black attorney to serve as president of the BCBA. Me being president today is an opportunity for long-term change. As we head into this post-pandemic year with renewed vigor for public activity, I will continue the path charted by the esteemed past leadership and focus on promoting the interests of the BCBA membership,” he said.

As a leader of the high-powered lawyers’ guild, Foy will prioritize filling seven vacancies on the Bergen County bench, a number expected to rise to 10 by the end of the year. His other priority, as one of 32 lawyers part of the Working Group on Jury Selection in the state, is combating the implicit racial biases in jury selection, according to NJ.com.

“I’m the 124th president, the first person of any color,” Foy said, as per the news outlet. “Now that I’m here, I want to make an impact. And the impact that I’m trying to make goes beyond the surface of my skin.”

Growing up in Englewood, New Jersey, Foy graduated from Syracuse University and received his law degree from the University of Maryland Francis King Carey School of Law. He began his career as a prosecutor in the Bronx District Attorney’s office in the mid-1990s. Later, for more than two decades, he worked in criminal defense in Bergen County. He is a founding partner in the firm Foy & Seplowitz in Hackensack.

“It’s got to be more than I’m the first Black president,” Foy said. “I want to really make us better and more inclusive as an organization. And when I leave, I will look behind me, and I know I will see Muslims and Koreans who are attorneys and are a part of that organization.”