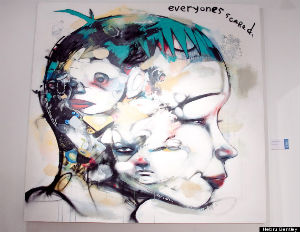 While attending Miami’s Art Basel fair this past week, pop mogul Jay-Z took a a fancy to a paintingÂ (pictured) by 31-year-old Chicago native Hebru Brantley, according to the Huffington Post.

LeBron James’ manager, Maverick Carter, reportedly saw the piece first and thought it would be something Jay would like. Jay-Z had the artist personally deliver the painting Â to his hotel room.