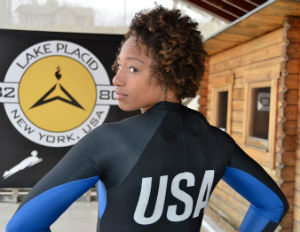 The 2014 Winter Olympics being held in Sochi, Russia is just around the corner beginning on February 6, 2014.

The Shadow League sits down with Olympic hopeful and bobsled pilot Jazmine Fenlator to discuss her career and beginnings. Fenlator faces pressure literally at every turn. She navigates a 100km per hour bobsled through a complicated maze placing her as third-ranked women’s bobsled pilot.

“Fenlator is the third-ranked women’s bobsled pilot in the U.S. With a couple of days of qualifying racing to go before the 2014 Winter Olympics pops off in Sochi, Russia on February 6, she’s on the cusp of snaggingÂ a Team USA jacket. IfÂ she holds her position until Sunday when we nominate our Olympic bobsled team,â€ saidÂ USBSF Marketing & Communications Manager Amanda Bird…”we expect to qualify three sleds.â€