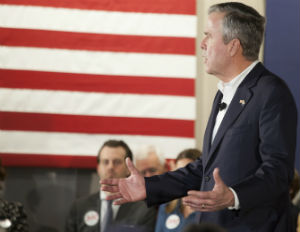 In his first in-depth interview since bowing out of the race for the GOP presidential nomination in February, Jeb Bush spoke with Dutch newspaper, NRC Handelsblad, about his failed campaign, the state of the Republican party, and why he won’t vote for Donald Trump.

As first reported by the Huffington Post, during the interview with NRC,Â Bush delivered a scathing criticism of Trump’s attempts at outreach, specifically his tone-deaf Cinco de Mayo tweet.

“What Trump did was so insensitive. First, not all Hispanics are Mexican. Secondly, not all Hispanics eat tacos. Thirdly, showing your sensitivity by eating an American dish is the most insensitive thing you can do. Fourthly, to say this, next to all things he already said, is a further insult,” Bush said to NRC. “It’s like eating a watermelon and saying, ‘I love African-Americans,'” the former Florida governor continued.

According to Bush, if the Republicans lose in November’s general elections, “We Republicans have ourselves to blame.”