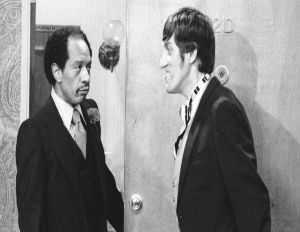 Actor Sherman Hemsley passed away close to six months ago and has yet to be buried.

Hemsley’s body remains refrigerated in El Paso’s San Jose Funeral Home while a variety of players are contesting his will and his cause of death.

Hemsley’s modest $50,000 estate lists Flora Enchinton, his manager for over 20 years and live-in friend, as his soleÂ beneficiary. But Richard Thornton of Philadelphia has appeared, claiming to be Hemsley’s half-brother. A DNA test has been ordered to determine if they are in fact related, but the results are not available.

And another person has come forward, a ReverendÂ Michael George Wells who claims to be a cousin of Hemsley’s on his mother’s side.Â The Methodist minister questions Hemsley’s cause of death and the validity of the will; and believes the estate to be worth “beyondâ€ the $50,000 Enchinton claims it to be.