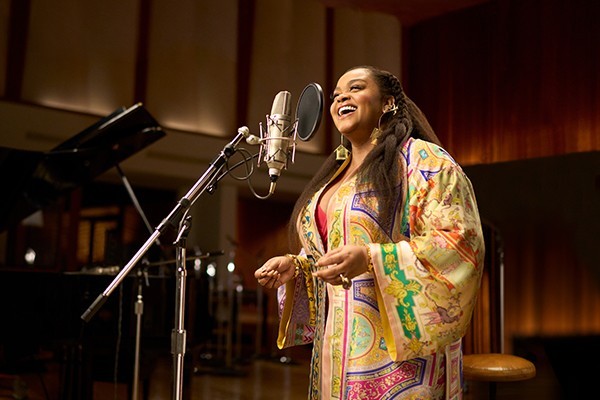 Nationwide has answered that call over the past 96 years, offering several lines of insurance and “annuities, mutual funds, retirement plans and specialty health services,” according to the company’s website. An insurance company of its magnitude and with so much skin in the game could not exist without a commitment to its customers and clients—and not just any commitment but one that is tried and true. In addition to offering solid insurance, the Fortune 500 company has been at the forefront of philanthropy and civic engagement.

Since 1965, Nationwide has solidified that dedication with its widely known and uber-catchy “On your side” slogan and continues to do so 52 years later, bringing pop culture and soul into the mix. Past jingle campaigns have featured broadway and film sensation Leslie Odom Jr. and NFL football player Peyton Manning. And after a year fraught with a global coronavirus pandemic that claimed over 500,000 lives, racial and state-sanctioned violence that affected the Black community, and a contentious presidential election, Nationwide’s 2021 campaign, featuring the legendary and sultry Jill Scott, is timely. BLACK ENTERPRISE sat down with the award-winning songstress, who happened to be recuperating from her second COVID-19 vaccination, and Ramon Jones, Nationwide’s executive vice president and chief marketing officer, to learn how it all came together.

BLACK ENTERPRISE: We’d be hard-pressed to find anyone who is not familiar with Nationwide’s slogan, in particular the jingle which is so popular. Tell us about the transition from what people are familiar with to this new sound that you’ve created with Jill?

Ramon Jones: We’ve had lots of different campaigns over the years and most recently most consumers are probably familiar with our Peyton Manning and Brad Paisley series of ads. They are product-focused, they are intended to get a laugh or two, we sneak the jingle in there and Peyton Manning has done great work with our jingle. But for this next phase, it’s reimagining some work we did a few years ago. So we had a song campaign some time ago. You might remember the name Leslie Odom Jr.  We had Tori Kelly that participated. We switched to the Brad Paisley-Peyton Manning campaign for a while, but in an age where people need to feel cared for, where people need to take a beat and listen, I wanted to take an opportunity to help put that into the media as well. We have a company motto. It’s to protect people and their futures with extraordinary care. As a team, we’ve talked a lot about that. What does extraordinary care look like and feel like? And as we looked to take the next step with our advertising campaign, we wanted to be able to communicate that extraordinary care. Part of it is looking at how the songs campaign made people feel and part of it is looking into how we communicate our brand. Our jingle is known so let’s take advantage of that from an advertising and media perspective and let’s talk with a voice of compassion, a voice of care, and we started thinking about what type of artists are out there. What artist can help us communicate that? And I’ve been a Jill Scott fan forever. So our campaign team pulled together a list, our media company pulled together a list, and as we were looking at these lists, Jill Scott just kept coming up and that’s how we began moving in the direction of tapping back into song campaigns but using a voice like Jill Scott, who is an amazing storyteller, to help us sell our brand.

What goes into pulling together such a talent?

It helps to have a brand like ours! The Nationwide jingle helps, and it’s not an unknown quantity. It also helps to represent a company that has really solid values. It’s more than just, I want you to sing my jingle it’s more of, ‘Hey, I want you to be part of the Nationwide family.’ It’s my job and Jared’s job and everybody’s job that works at Nationwide to protect that brand. You know there’s many artists that have approached us that wouldn’t necessarily be a good fit for us. It’s a two-way street and when our team reached out to Jill’s team to start having those conversations we realized very quickly that this could be a very good fit for both of us and her reputation is very solid. She’s an amazing storyteller and all of those reasons made this a very, very easy partnership.

I was telling Ramon that nothing gives a hug to our collective people like a Jill Scott song, as he was telling me about this campaign and how it’s not only important to have a cultural icon behind it, but how important it is to have you. I wanted to know from you why it was important to lend your voice to this initiative.

Jill Scott: Well first off, I’ve known a couple of people who have had [Nationwide] insurance for years. My grandmother was one of those people. Nationwide has this sweet song that everybody knows, so for me, I just wanted to be a part of something that felt good that stood true through the test of time. A lot of people have asked me to support so many products over the years and I just haven’t, but when this showed up I was like, ‘hell yeah.’ I’m ready to go.

I imagine you brought that hell-yeah energy to the work you’ve done together. What was the process like working with Nationwide? Was it different from the way you gig in any other way?

Jill: Oh yeah, first of all, I’m not supposed to talk about this but so much, but Nationwide took really, really good care of us. I brought my son with me because I wanted him to go to the studio. I wanted him to see Jim Henson Studios, that’s where we recorded. I recorded there one other, maybe twice and the energy from Jim Henson came out. It was just a really warm-loving environment. You know, in business it can feel medicinal. You do your work, get it done, goodbye. But it didn’t feel like that at all. It felt warm and welcoming, and every executive I met felt warm and sweet. That is such a rare bird.

I want to go back to you, Ramon. Is there a target market for this particular campaign?

Ramon: There always is. We use different campaigns to target different segments. We’re looking to speak with consumers that typically look for insurance on their own. We want them to consider building that trusted relationship with Nationwide. We are talking directly to the consumer market, but we’re also talking to its intermediaries, so that’s agents, brokers, advisers who help consumers make those decisions. We want them to know that we’re a company that cares and you can trust us with your customers. So there’s two targets: there are those consumers that we want to understand the kind of company that Nationwide is. When we say we’re on your side that means something. That means that that’s it’s authentic and we truly care about the people that trust us with their car insurance and life insurance and their retirement savings. I mean those are big deals; these are long-term relationships that we like to build so we’re talking to that consumer but we’re also talking to that adviser that likes to help guide some of these decisions.

I have a collective question. With the “On Your Side” soundtrack what can we expect? How do you want this campaign to land?

Ramon: I’ll share some of the tactical information. We’re launching with cable and broadcast, so you’ll see it on TV. You’ll see it running for the next couple of weeks. We’re going in with a really heavy push. We’re going with satellite radio, so the Pandora’s of the world, because of Jill’s amazing voice first and foremost and because the jingle itself lends itself to radio platforms. Thirdly, you’ll see it in streaming platforms like Roku and Amazon. We’re going to launch over the next several weeks and months so that the world knows that Nationwide and Jill Scott have partnered.

Jill: I can’t wait for you to see. I will collaborate with a longtime trusted friend. He was 19 [years old] when I first hired Adam Blackstone. He’s gone on to be everything and everywhere producing, a music director for Mary J Blidge, Eminem, Jay-Z. He’s just exploded all over the music industry and there was no one else I wanted to call. I’m just so proud of him. The music is very sweet. You already know the melody, but we’ve added lyrics to it that are equally as touching and sweet as the company that I’ve grown to know. I’m really excited about people hearing that.

If you haven’t already seen Scott’s magical spin for Nationwides “On Your Side” soundtrack, peep a snippet below.