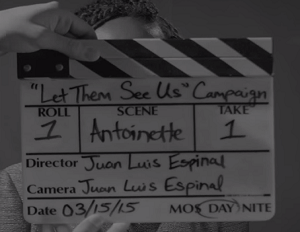 Studies show that African Americans held a stagnant 12 percent of all jobs between 2001 and 2014, and with recent data from the Pew Research Center showing that women make up only 5 percent of CEOs in the nation’s Fortune 500 companies, it’s clear that corporate America is struggling to create a work environment that’s reflective of diversity and inclusion.

That’s why leaders at the new recruiting platform Jopwell have launched the Let Them See Us campaign to call out corporate America for it’s failed efforts. Founded by Ivy League graduates Porter Braswell and Ryan Williams, Jopwell is a tech start-up that’s dedicated to linking companies with talented minority candidates.Â  After seeing first-hand how employers failed at recruiting and retaining minority employees, Braswell and Williams left their jobs at Goldman Sachs to launch Jopwell in July 2014.

“Many companies fail because of inadequate marketing, a limited pipeline of minority candidates, and limited resources for diversity initiatives,” 27-year-old Braswell told BlackEnterprise.com. “Companies have difficulty marketing the breadth of available roles and opportunities within their organization to a diverse demographic. In addition, they struggle to recruit diverse candidates due to a lack of a pipeline to these individuals with the resources dedicated to their team.”

In an effort to address this issue and get more people on board with its mission of increasing workplace diversity, Jopwell has created the Let Them See Us campaign pledge to raise corporate America’s awareness about the thousands of talented minority candidates that exist.

To learn more about how you can join the movement visit letthemsee.us and check out the campaign’s eye-opening video below. Also, hear Jopwell’s CEO Porter Braswell speak about his journey to becoming a young entrepreneur at Black Enterprise’s 2015 Entrepreneurs Summit.