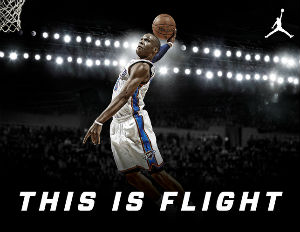 The exit by Wade was shocking to many, but Jordan has recovered quickly signing one of the league’s young, explosive stars in Oklahoma City Thunder guard Russell Westbrook.

But make no mistake: Wade’s jump to Li-Ning is a game-changer. The deal, said to be worth a guaranteed $100 million, also comes with “significant” equity in the company.

“Now that Jordan Brand has signed another superstar to their roster, it will be interesting to see just how Westbrook fits into their plans for the short and long term,” writes Juan Martinez for Kicksonfire.com “The only thing we know for sure is that Westbrook is unlike any other athlete — at least in basketball — that Jordan Brand has ever signed.”

Read more at Kicks on Fire.