Journalist and Diversity Champion, Dori Maynard, Passes Away at 56 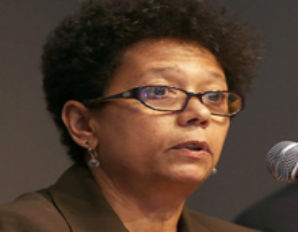 Dori J. Maynard, a journalist and long-time champion of diversity in the newsroom passed away from lung cancer in her Oakland home on Tuesday, Feb. 24th reports The Maynard Institute for Journalism Education. She was 56-years-old.

Serving as president of the Oakland-based Maynard Institute at the time of her death, Maynard fought tirelessly for the future of the program and was a huge advocate for bringing diverse voices to news and public discourse. She is the daughter of Robert C. Maynard, a co-founder of the institute and publisher of the Oakland Tribune. After graduating from Middlebury College in Vermont with a bachelor’s degree in American history, Maynard went on to work as a journalist herself at the Detroit Free Press, the Bakersfield Californian, and The Patriot Ledger in Quincy, Massachusetts.

Bob Butler, president of the National Association of Black Journalist, commented on the institute’s site saying, “You can hardly put into words how important the work of Dori and the Maynard Institute did to train young people of color for careers in journalism and how the institute trained the media to write fair stories about communities of color.”

In 1993, Maynard and her dad became the first father-daughter duo to be appointed Nieman scholars at Harvard University. According to the institutes website, on the morning of her death Maynard was discussing plans with a board member to help the institute continue to grow and attract funding to support that work.