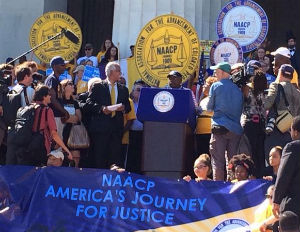 In June, NAACP President and CEO Cornell William Brooks announced a historic march called “America’s Journey for Justiceâ€ to restore voting rights for the country. It was an effort that turned into an 860-mile journey that began in Alabama—the state that brought the Shelby case to the Supreme Court, which struck down a key section of the Voting Rights Act—and ended today in Washington D.C.

#JusticeSummer marchers are only 8 miles away! An email is coming your way on how to get involved! pic.twitter.com/oOdFkmxRmV

The NAACP held a series of demonstrations, teach-ins, and training sessions from Selma, Alabama to the nation’s capital, venturing through Georgia, South Carolina, North Carolina, and Virginia to bring awareness to communities where there are victims of discriminatory and regressive voting rights tactics.

Check out highlights of the completion of the march from the steps of the Lincoln Memorial:

We know the blood, sweat and tears enacted the #VRA into law. That’s why we’re here. #JusticeSummer

.@NAACP @CornellWBrooks speaks on Lincoln Memorial addressing the crowd of the accomplishment of #JusticeSummer March pic.twitter.com/83VMAA6EMg

I joined @NAACP‘s America’s Journey for Justice on the steps of the Lincoln Memorial today. #JusticeSummer pic.twitter.com/qSZmEDjYyY