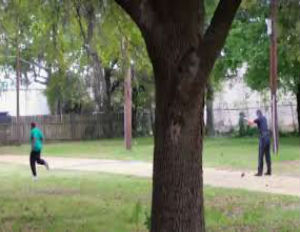 The judge overseeing the murder trial of Michael Slager–a former South Carolina police officer, who fatally shot Walter Lamar Scott in the back last year–declared a mistrial on Monday, after jurors failed to reach a verdict in the case.

“Despite the best efforts of our members we are unable to come to a unanimous decision,” jurors said in the note Monday afternoon after three days of deliberations, reports NBC News. The jury was compromised of 11 white people and one black man.

“The court, therefore, must declare a mistrial in this case, and I so declare that this case is mistried,”Â announced Circuit Judge Clifton Newman.

Slager was charged with murder for killing Scott, a 50-year-old, unarmed black man, followingÂ a routine traffic stop in North Charleston, S.C., in April 2015. After being pulled over, Scott jumped out of his vehicle and fled the scene. Video taken by a bystander shows Scott was running away from Slager through an open field, when the former patrolmanÂ opened fire, shooting him five times in the back. Immediately after the shooting, Slager said that Scott tried to take his stun gun, however, video proved that was not true.

Slager, who was fired from his position, claimed that he feared for his life.

If Charleston County prosecutors decide not to seek a retrial, then it is possible that the 35-year-old white ex-copÂ could possibly go free.Â In the meantime, he expected to remain free on bail.Â SlagerÂ will also face civil rights charges in a federal trial slated for early 2017.

“Despite cell phone video evidence depicting Slager shooting Scott multiple times from more than 15 feet away and debunking Slager’s claims that Scott had taken hold of his Taser gun, a jury was unable to reach a unanimous decision after four days of deliberation.,” he said in a press release sent to Black Enterprise.

He also pointed out that Scott was just one of many unarmed black men who were fatally shot by a police officer in 2015.

“The story of his death and the result of the ensuing trial are tragically representative of the epidemic of racial profiling in America. As discussed in the NAACP’sÂ Born Suspect Report, the seven states that keep comprehensive traffic stop data,Â police stop, ticket and search black drivers in disproportionately large numbersÂ across the board.Â And of the 991 citizens, including Scott, who were fatally shot by police in 2015, at least 43 percent were black or Hispanic. Of the 94 unarmed victims, 40.4 percent were black.