With the National Football League officially starting their season last night, the two teams, the reigning Super Bowl champions Kansas City Chiefs and the Houston Texans, gathered on the field for a moment of unity and fans in the stands booed the players for their display, according to Yahoo Sports.

During the moment of unity between the Texans and Chiefs, some fans responded by booing.pic.twitter.com/qRnle1XiJg

At last night’s NFL season-opener at Arrowhead Stadium, according to the NFL, the stadium announcer led the teams in a moment of unity by asking the crowd to “please join us in a moment of silence dedicated to the ongoing fight for equality in our country.”

The teams were led by quarterbacks Patrick Mahomes of the Chiefs and Deshaun Watson of the Texans, as the players and coaches then gathered at midfield and interlocked arms. The following seven messages, chosen by the players, were shown during the moment of unity: “We support equality. We must end racism. We believe in justice for all. We must end police brutality. We choose unconditional love. We believe Black lives matter. It takes all of us.”

Kansas City Mayor Quinton Lucas said the booing was not reflective of the Missouri city.

We’re a good city of good people. I heard boos too. But we also have hundreds of thousands more around here who respect the message the players are sharing; who respect the rights of our players and people to voice a strong message and who are working to make us better each day.

Texans defensive end J.J. Watt was happy with the moment of unity but didn’t understand the boos that could be heard from those in attendance.

“At the end of the day, we are all brothers and part of a brotherhood. We had great conversations and we’ve done a lot of great things,” Watt told reporters, per the NFL Network’s James Palmer. “That’s the decision we made as a team. The moment of unity I personally thought was good. I mean the booing during that moment was unfortunate. I don’t fully understand that. There was no flag involved. There was nothing involved other than two teams coming together to show unity.” 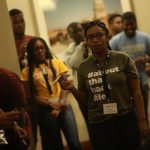