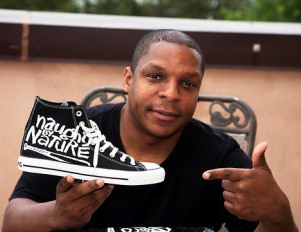 The TRPL (The Righteous Path in Life) Threats will be available at the Solexchange National Sneaker Convention at the Meadowlands Exposition Center in Secaucus, New Jersey, on Aug. 26. The aforementioned artists also will kick-off a “sole-fulâ€ performance at a vendor mixer dubbed the “90’s Hip-Hop Night.â€ Other hip-hop stars, Waka Flocka and Lil’ Uzi Vert, also will perform live at the convention.

“It is a great feeling to partner with Solexchange,â€ East Orange, New Jersey-born Naughty by Nature band member Vin Rock said in a released statement. “This lets us get right to the heart of the sneaker lovers. We will be able to capture a lot of attention and school the young kids on who we are.â€

According to Rock, the owner of the sneaker company, Danny Shaw, approached him with the concept of taking popular silhouettes and branding them. “I thought it was a great idea. I am the one that goes out and get the licensing for the sneakers. We have 3,600 pairs for sale now. This started with people that I have personal relationships with. I reached out and they were the first ones to sign on,â€ he stated.

The concept is for hip-hop, by hip-hop. Priced at $100, the TRPL Threats will start with online sales through the website as well as at sneaker conventions. Down the road, the objective will be to find the right boutique or major shoe seller.

“It is pretty hard to get a Converse, Nike, Adidas to buy in and work with you. We are independent and out of pocket,â€ added Rock. “We’re looking to get the younger guys to brand themselves, and put their names out there. We started working on the Hip Hop Series and we were getting a lot of positive feedback.â€

On the possibility of partnering with a big sneaker company, he noted, “We wouldn’t be ignorant to say no to a partnership with a staple in the shoe industry. If we are able to do a great job, I anticipate one company can come, and be good for us.â€

“I am a ‘80s baby,’ and grew up in era of Run DMC, Grandmaster Flash and the Furious Five,â€ added Rock. “We assembled in high school in the mid-to-late 80s, and as we performed locally, we invited Queen Latifah and the Flavor Unit to one of our shows and gave them our demo. They were starting up and we were the first artist to be signed to Flavor Unit Records.â€ The rest is hip-hop history.