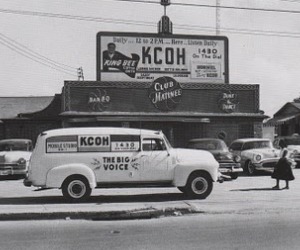 KCOH, one of the oldest African-American-owned radio stations, has been sold for $2.1 million and will re-launch next year as part of the Catholic-oriented Guadalupe Radio Network. According to a report in the Houston Chronicle, all current employees will be fired.

This move ends a 59-year history of serving Houston’s Black community with not just entertainment but also local information.

KCOH Radio can trace its roots as far back as May 5, 1948, when it launched its broadcasting debut as a “good musicâ€ station. It began programming with the classics and popular dance music which consisted of 80% music and 20% news, sports and public affairs while it focused on limited commercial interruption.

The call letters associated with the station has been said to stand for “City of Houston,â€ and in 1953, Robert C. Meeker bought the radio station, defining it as the first black owned radio station in Texas, third in the nation and the second oldest AM station in Houston to keep its original call letters.

“When we established KCOH with the first and only all-Negro programming in the Texas Gulf Coast area, we were convinced that the format for success must be created around public service for the community,â€ said Robert C Meeker, president and general manger of KCOH, in 1963. “The medium of radio is only as important as what it puts into the community and the service it renders.â€

The station’s Looking Glass studio has provided an opportunity for the station’s on-air personalities to directly connect with their audience. Locals recall how in the 60’s & 70’s, it was not unusual to walk past the offices at the corner of Almeda and Wichita in the Third Ward, and maybe see Muhammad Ali, Ray Charles, George Foreman, or Ike and Tina Turner being interviewed.

“KCOH is like a pillar in the community and they’ve always kept it real, told the real stories, kept it true to life and that’s what I like,â€ said listener Kay Shaw. “What we need, and what we need to hear, is not said on other stations. So that’s what we’ll be missing,â€ Shaw continued.

Many in the local community say they they’ve depended on 1430AM for years. Programs such as Ralph Cooper’s “Sports Rapâ€ and the afternoon “Confessionsâ€ were very popular with residents.

KCOH secretary Jacqueline Viola says as word of the sale of this historic station spread, the phone lines have been ringing off the hook.

“The phone has been blowing up. Everybody wants to know when did this happen. And they thought that we were going to be around for a while. But I guess not.â€

Don Samuel with KCOH said they didn’t think the historic station would end this way.

“We knew something was going to happen. We were hoping that someone in our community would have stepped up and purchased KCOH. Unfortunately, it didn’t happen,â€ he said.

Don Samuel hosted the lively afternoon program that mingled R&B and Zydeco music, and the late-night show titled “This Is for Grown Folks.â€

Staff at the radio station says it hopes the community never forgets the memorable moments they attempted to bring to listeners across the city day in and day out.