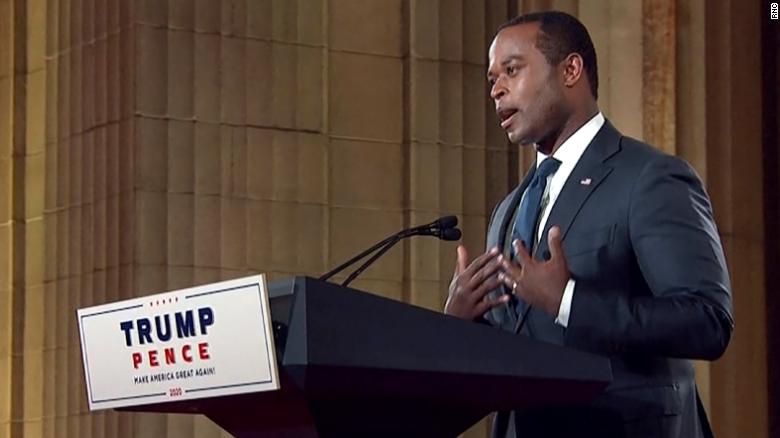 Cameron, the protégé of Senate Majority Leader Mitch McConnell, seemingly could not wait to begin attacking the Democratic presidential nominee.

“I think often about my ancestors who struggled for freedom. And as I think of those giants and their broad shoulders, I also think about Joe Biden, who says, if you aren’t voting for me, ‘you ain’t Black,'” Cameron said, referencing an interview Biden did on a New York radio show.

Cameron also mentioned a 2012 comment by Biden where he argued that Republicans, under the leadership of then presidential candidate Mitt Romney, would put the Black community “back in chains.” Cameron also attacked Biden for incorrectly stating Hispanic communities are more diverse than Black communities.

“Mr. Vice President, look at me. I am Black. We are not all the same, sir. I am not in chains,” Cameron said loudly. “My mind is my own. And you can’t tell me how to vote because of the color of my skin.”

Cameron mentioned Biden eight times during his address, but mentioned the biggest case sitting on his desk just once.

“Whether you are the family of Breonna Taylor or David Dorn, these are the ideals that will heal our nation’s wounds,” Cameron said, referencing a quote from former Republican President Dwight Eisenhower that says “Democracy is a system that recognizes the equality of humans before the law.”

Cameron added Republicans will “never turn a blind eye to unjust acts.” Cameron ended his speech reminding the audience that Americans are defenders of “life and individual liberty.”

However, Taylor was killed in March and five months later her killers still walk free. Many Black Americans, who look a lot like the Kentucky AG, are wondering when Taylor, George Floyd, Jacob Blake, and more will be defended.