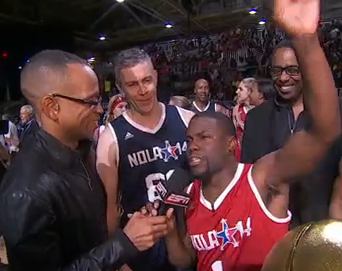 Kevin Hart gave the MVP award to Education Secretary Arne Duncan -- but not before promoting his latest film, 'About Last Night.'

Funnyman Kevin Hart was voted by fans to be the MVP of All-Star Weekend’s Celebrity Game, despite scoring only seven points to go along with four assists for the West in its 60-56 loss Friday night. It marked the third time in a row that Hart won the award — but he wouldn’t accept.

Instead, Hart insisted it go to Arne Duncan, President Obama’s education secretary. Duncan, who is 6-5 and played hoops at Harvard, dropped 20 points, and grabbed 11 rebounds and six assists for the East.

Hart said he had to be “a humble loser.”

I had a great time–and a great team–at #SprintCeleb game. Thx for all the support. Keep cheering for education! pic.twitter.com/ky1qpxGXUk