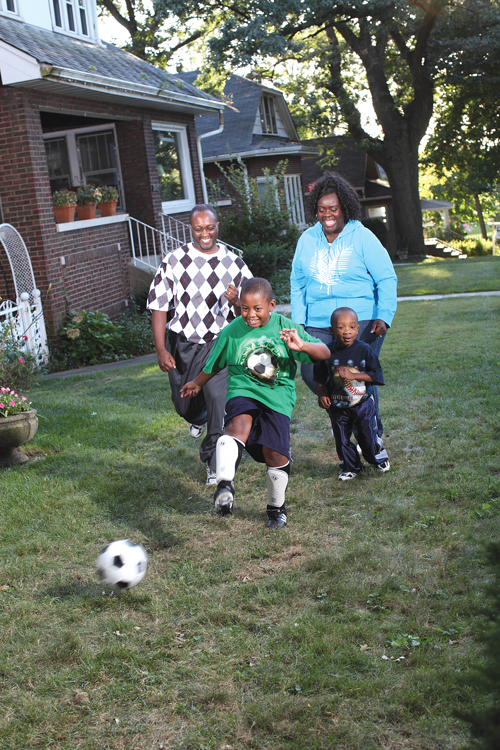 It’s obvious to the Martins that they need to change. According to financial experts, money issues are the source of most disputes among married couples. “There is a commonly held perception that we don’t talk about money; actually, we talk about it all the time–we are just having the wrong conversation,â€ says Jacquette M. Timmons, author of Financial Intimacy: How to Create a Healthy Relationship With Your Money and Your Mate (Chicago Review Press; $14.95). Timmons, who is also the president of Sterling Financial Management, believes couples like the Martins need to have proactive discussions and plan actionable steps. “They have to see and make the connection between how their day-to-day actions affect the family’s long-term financial goals,â€ she adds.

Timmons suggests that the Martins not view the adjustments as “giving upâ€ something, but more as a reallocation of their money.

The Advice
The Martins must agree on their financial priorities, reduce their spending, and focus on debt reduction and elimination. black enterprise formulated some steps to help the couple get back on track.

– Cut up your credit cards, create a budget, and stick to it. Many of their debts are carrying high interest rates as a result of late payments and poor credit history. Currently, the Martins have 17 accounts with rates as high as 29.99%. It is imperative that they work hard to pay their bills on time to help improve their credit scores, says Danny Freeman, principal adviser with Darda Financial Services in Winston-Salem, North Carolina. In doing so, the Martins may eventually get the opportunity to refinance their mortgage or shift balances to debt obligations that have lower rates.

– Build an emergency fund. Put the $2,000 contest winnings into a one-year CD; which could yield around 1.45%. With a CD, the money stays liquid while preventing the Martins from temptation to spend it. From there, the Martins should begin to transfer $83 each month from their checking account into an interest-bearing money market account, suggests Freeman. “The goal should be to save $1,000 as an emergency reserve over the next 12 months.â€ In year two, they should double the amount to $166 per month. This will give the Martins $3,000 in cash in 24 months (plus the CD). They should continue saving at this level until they accumulate a $15,000 fund for emergencies.

– Pay off debts in four years. Freeman says the Martins can eliminate all debt (outside of mortgages) in four years. Here’s how: The Martins should continue making minimum required payments but find $237 each month in the budget to pay off the Roamans and Lane Bryant accounts, which have the highest interest rates. This will free up another $40 per month. From there, apply $237 per month for three months to pay off the next highest interest rate: Fingerhut. In 120 days, the couple will have eliminated three accounts with interest rates in excess of 24%. At that point, the Martins should be able to apply $600 a month toward their Beneficial credit card. They can pay this card off in 21 months. Then, take that $600 plus $77 minimum required for Wells Fargo, and pay it off in four months. Later, apply that $677 plus another $70 to Capital One, paying it off in two months. Take the $747 previously paid on Capital One and apply it to the Home Depot account, paying it off in one month. Finally, take the roughly $805 that is now freed up by eliminating the aforementioned debts–which will take 28 months in total–and apply that money to pay off the remaining consumer debts.

– Focus on retirement savings. If they stick to the prescribed debt plan over the next four years, theÂ  Martins can free up $1,389 in monthly cash flow to put toward their children’s education. In four years, the couple can apply $689 per month toward the 529 plans and a regular taxable investment account in their names. If the boys end up qualifying for scholarships and financial aid they can shift these funds to be used for their retirement. Assuming a retirement age of 62, the Martins should put the remaining $700 per month in Roth IRAs. Also, contribute to their 401(k) plans at work at a level high enough to get any company match. The Martins should be able to accumulate about $493,606, assuming an 8% annual return rate. This will generate a monthly income of $1,851 to $2,468 in addition to any amounts received from Social Security.