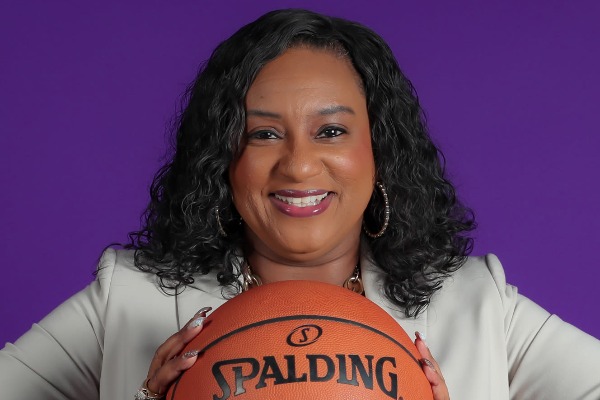 Kiesha Nix is making history as the first Black woman to serve in the vice president role for the Lakers organization.

Nix was promoted from her previous title of executive director for the Community Lakers Youth Foundation to the VP of Charitable Affairs, Sports Illustrated reports. After working on community events alongside Magic Johnson for over a decade, the Lakers legend personally called Nix to congratulate her on the promotion.

“I was in the middle of a Zoom call planning a community holiday event when his name showed up on my phone. I almost didn’t take the call,” Nix said. But after answering the call she heard him say, “Hello Miss VP.”

“I had to pinch myself,” Nix says of hearing the big news.

It was while working for Merrill Lynch and Bank of America when Nix first crossed paths with Johnson and made a career transition into community relations and fundraising.

“I started out at the bottom of the totem pole almost 30 years ago as a project manager at Merrill Lynch, and by the time I left, I was negotiating contracts on behalf of Bank of America after the two institutions merged.”

While working as a financial adviser, Nix combined her natural passion for helping the community in ways that would leverage her wealthy clients’ net worth to maximize social impact. While volunteering with the bank’s charitable foundation, Nix raised money, put together events, and built relationships.

“It was not part of my normal day-to-day job responsibilities, but I did that work for 18 years,” Nix recalled. “I saw it as a way to bridge the gap between our clients and the kids in South Central, Watts, and Compton because that’s where I grew up.”

Nix is well-known for her work for the youth in LA. Now, as the first Black woman to serve in her new position, she will oversee programming and funding priorities for the Lakers’ charitable efforts.

“I am born and raised in South Central L.A., and it was important for me–when I delivered the check, or when we delivered the resources, that the kids get to see me,” Nix told the LA Sentinel.

“Because they get to see a lot of themselves in me, and I see myself in them. I let them know where I grew up and where I went to school because I wanted to give them some inspiration.”