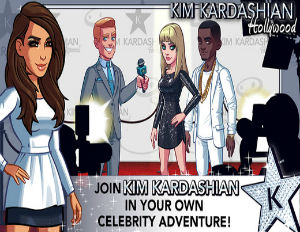 The millions continue to rain down for Kim Kardashian.

The reality star’s golden touch now includes her video game, which Bloomberg reports is now on track to rake in as much or more than $200 million. Her empire already includes a clothing, jewelery and cosmetics line.

Bloomberg also reports since it was released June 25, Kim Kardashian: Hollywood has “risen as high as second among most-downloaded free-to-play games at Apple’s U.S. App Store“. And get this, the game’s success has driven shares of creator GLU Inc Mobile up 42%.

The new game takes players inside Hollywood, with a virtual Kim as sherpa with advice on how to become an A-list celebrity, starting out from the so-called E-list. Hey, who better right?

According to Bloomberg, “While the game is free to play, the goal is to get users hooked on in-app purchases such as clothing or a burst of energy needed for traipsing through Hollywood. Users can spend as much as $99.99 for 175,000 virtual dollars. A trip to Beverly Hills costs 4 game “dollars,â€ while 400 will buy a necklace”.

The game is the only title rated top 10 in the App store with a 5-star rating. That’s the highest rating possible, based on thousands of reviews.

Kardashian tells E-News, “This project has been an amazing experience. I’m so excited that people are enjoying the game”.

According to Forbes, the mother-of-one who recently got married to musician Kanye West earned $28 million in the past 12 months.